Fans of the Samsung S III are receiving an update to the handset they love so much, with the smartphone maker pushing a new version of software out.

Only available for the international version of the hugely popular device, the update weighs in at around 73MB and does not offer any additions that will blow your socks off. According to the literature though, users will be in for an increase in stability, which is always welcome.

Possibly the only noticeable change in this particular software update is a new brightness slider which now lives in the notification drawer, giving users an easy and quick way to alter the brightness of that massive AMOLED screen. The slider also features a toggle which gives users the ability to switch the auto-brightness feature on or off.

Beyond the two changes outlined above, there doesn’t seem to be a great deal to get excited about in this latest update. Still, any update is a good update in our book, so long as it isn’t removing features that is. Samsung isn’t exactly notorious for its speedy software updates, so we’ll give them a somewhat muted pat on the back this time around. 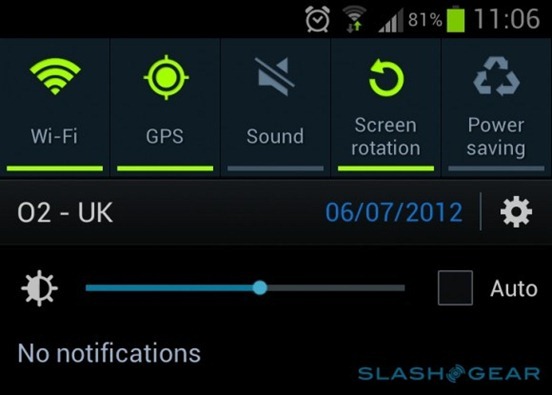 The Samsung Galaxy S III is the hottest new phone on the market at the moment, replacing the HTC One X as the top Android handset to buy currently. With plenty of features and a re-jigged software package that sees TouchWiz offer a less intrusive performance than previous versions, the Galaxy S III is proving to be very popular with both retailers and buyers alike. There is little doubt that this handset will go on to be one of the best selling ever, and it gives Apple something to take into consideration when specking out the next iPhone.

Due in October, the iPhone 5 now knows which hero phones it is likely to be up against this year, and Apple will be trying to ensure its new offering can compete. Samsung is king right now, though, and it will be doing everything within its power to make sure that is how things stay throughout the rest of this year at least.

We really can’t say or sure how Apple will surprise us this time.