Taking time out from readying the eagerly-awaited Ivy Bridge chips for the latest spate of MacBooks, Intel showed off its new inductive charging solution at the Computex event. Smarphones gobble up an unholy amount of battery, and those low juice warnings are a constant bane of the lives of most mobile device users. Finding a charging cable is often a scramble, and the whole process in general is just inconvenient. It would be nice if all you had to do was plonk your device next to your notebook for the charging process to commence in an unattended fashion, wouldn’t it?

That’s the idea behind Intel’s latest project. In short, all you would need to do is attach the charging facility to your device (presumably, many would feature this within the hardware as standard), and instead of requiring a standalone charging mat, all you would need to do is slide your device next to your laptop and hey, presto, your precious, power-demanding gadget would begin charging. 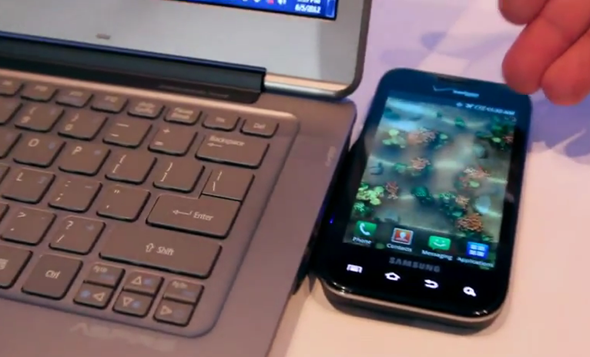 There would be a notification popup confirming the process is in effect, and although it’s not the sort of system we’re likely to see in the near future, there’s certainly a strong market for this. When I look at my device and see that 100% notification, I feel safe in the knowledge I can game, text, e-mail and go crazy with my apps with little to worry.

Unfortunately, that feeling is all-too short lived as we all know, but imagine seeing your device has full battery when you haven’t even specifically gone through that usual charging rigmarole.

As with most futuristic showcases at tech events, we will have to wait and see if Intel has the innovation, time, and dedication to bring such an implementation to market. If all of the products and concept showed off at the likes of Computex reached fruition, we’d be living in Futurama, and we all want that to happen real soon don’t we?

As stated already, though, Intel has the more pressing issue of preparing those Ivy Bridge processors, and although Apple will be treated with favoritism for the initial batch, there are sure to be plenty of Ultrabook vendors waiting to implement the faster, more compact chips into their laptops.