Thunderbolt 2, which has hitherto been recognized only under its code name “Falcon Ridge,” is real, and Intel is planning on launching it later on in 2013. Most notably, Thunderbolt 2 offer bandwidth of up to 20 Gbps, which would not only facilitate simultaneous high-speed transfers, but also be capable of transferring and displaying 4K video.

4K, or “Ultra HD,” may not yet have established itself in the consumer market, but with both next-gen consoles arriving later this year with varying degrees of 4K support, we’re probably on the cusp of an Ultra HD frenzy. Once the consoles release, the slow process of 4K television sets reducing in price will begin, and in a couple of years time, it could well become the de facto standard of home TV viewing and gaming.

Thus, it’s important for the hardware makers to keep in the loop, and having just announced the rather pricey yet still impressive Intel Haswell processors, Intel says Thunderbolt 2 will launch at the close of this year.

In its announcement of Thunderbolt 2, Intel told how it utilizes an all-new controller chip that unifies the current Thunderbolt’s 10 Gpbs uni-directional channels into a singular, 20 Gbps bi-directional channel. This will, in effect, double the speeds moving either way, while also allowing for uncongested transfers back and forth simultaneously.

This new protocol is, to all intents and purposes, a tweaked controller chip and thus, it will work just fine with all of your preexisting Thunderbolt hardware.

Thunderbolt 2 will also support DisplayPort 1.2, which would allow for video streaming to either one 4K monitor, two QHD displays running side-by-side. 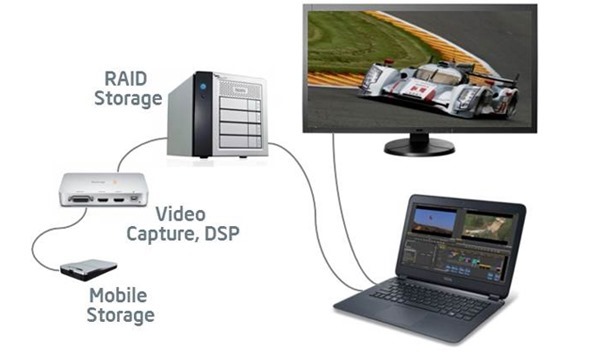 At this point in time, Apple is really the only company using Thunderbolt tech with the Mac range, but with Intel noting of as many as 30 different specs of PC now on board and whole bunch of accessories available, Thunderbolt 2 has a substantial platform from which to continue growth.

There are no set in stone dates for the launch of Thunderbolt 2 2013, but with production looking set to begin in 2013, we could see its emergence in the early parts of next year.

This is definitely good news for all of you 4K enthusiasts out there who are into movies, gaming etc., so please feel free to leave your comments below!