If you’ve been paying attention to the news over the last few days, you’re probably aware that the third beta of iOS 5 was seeded to developers earlier this week, and inevitably found its way onto file sharing sites hours later. Similarly to previous beta releases of iOS 5, Beta 3 requires users to have a registered developer account with Apple in order to get past the system’s built-in activation process. Thankfully, there’s a workaround.

This process takes advantage of a loophole that allows users to conduct emergency calls, even from devices that haven’t yet been activated. Assuming you already have iOS 5 Beta 3 installed on your device, here are the steps to get it up and running:

WARNING: We at Redmond Pie haven’t tested this method, and we wont recommend downloading iOS firmware files from anywhere other than the iOS Dev Center. The following instructions are shared for information and educational purposes only. Proceed at your own risk only.

Step 1: Boot up your iOS 5 device and "slide to setup", as requested.

Step 2: Once you get to the language selection section, quickly press the Home Button 3 times in order bring up voice over, then press the same button three times once again, which should display an Emergency Call option. Tap on it.

Step 3: Once the dialer shows up, call 112 for the call screen to show up. Quickly hit the "contacts" button on said screen to get out of it.

Step 4: Press the Home Button to go head to your home screen. Your device should now be activated.

Step 1: After restoring to iOS 5, put your device back into Recovery Mode.

Step 2: Unplug the device from your computer and turn it off. Now plug it again to your PC or Mac, and allow it to turn back on.

Step 3: Now when you get to the iOS 5 setup screen which says “iPod” or “iPad”, hit the power button to put your device in sleep mode, and then hit it again to turn it back on.

Step 4: Now instead of iOS 5 setup screen, you should see standard iOS bubbles. Just press the home button 3 times to bring up Voice Over.

Step 5: Slide the device to unlock, and notice the time on the top right corner: tap on it. As your device starts "talking" from the Voice Over feature, slide your 3 fingers down from the status bar to in order bring up Notifications Center.

Step 6: Tap the weather widget, followed by pressing the home button, and your system should be fully accessible.

Users should keep in mind that no one who isn’t part of Apple’s developer program should be able to get their hands on these early iOS 5 builds, since they’re still fairly buggy. In addition, downloading iOS from sources other than Apple’s developer site is illegal and there’s a chance, although slim, that you might get into trouble. If you want to get pre-release builds of iOS 5 legally, you can do so legally by purchasing a subscription at Apple’s developer website for $99 per year. This purchase won’t only give you access to pre-release software, but it will also allow you to download developer-oriented tools and documentation. It’s a must-have for iOS enthusiasts of all stripes.

iOS 5 is Apple’s latest version of its mobile operating system, which runs on iPads, iPhones and iPod touches. Announced at this year’s Worldwide Developer Conference, iOS 5 includes long-awaited features such as a revamped notifications system known as Notification Center, enhancements to Mobile Safari, additional built-in tools that allow users to set up a new device without plugging it into a computer, among others. 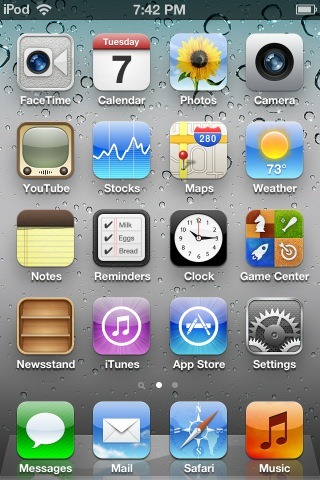 (kudos to Rviraj Minawala for the tip!)