Want to see Iron Man being drawn using a thirty year old computer? You do? Then you’re in luck, because that’s just what we happen to have here. We love many things here at Redmond Pie. We love cake. We love Ice Cream. We really love peanut butter. There’s movies and old computers, too. 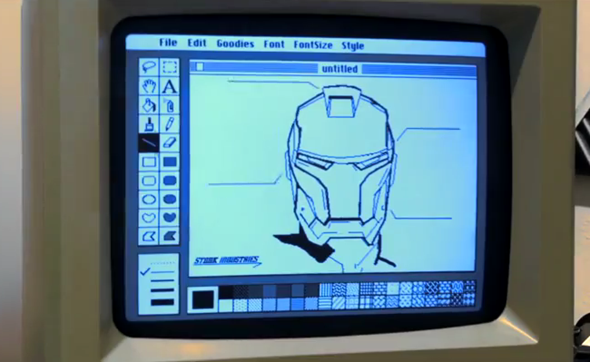 What we have here is one minute and twenty-six seconds of pure awesomeness, and by pure awesomeness, we really mean pure awesomeness, nothing else. For the duration of the video you will see an Apple II computer from way back in 1984. Not just that, but it is being used to draw one of our favorite characters from the brand spanking new Avengers movie, Iron Man. The result us surprisingly good, and we have to tip our hat to the man that made the whole thing. Well done sir, very well done indeed.

Of course, all this may not be so interesting if it was not being done on an old Apple computer. The first Mac, the machine features MacPaint which is being used to create that impressive rendition of Tony Stark’s character from the comic books and various movies that came after. The machine was made in 1984, and was part of that famous TV ad that everyone knows all about. Possibly the most famous TV ad in the world, and it was for the computer that was eventually used to draw Iron Man.

The only thing that is left to do is to sit back, relax, and watch the video once more. Drink it all in, and think about what life would have been like if Stark had tried to design the Iron Man costume using the technology of 1984.

Or using the technology of today, for that matter!