iBooks Can Read Out Your Books To You In OS X Mavericks, Here’s How

EBooks and other book offerings through the Kindle or iBooks remove a lot of that publishing overhead and allow readers to quickly get access to great content wherever they are. The next step in that progression is to remove the need to actually read the book yourself and have it auto-read out loud by the system.

Offering a text-to-speech function within electronic devices is certainly nothing new, even in the electronic book world. Amazon has offered this kind of feature through their Kindle devices for quite some time. Not everyone actually uses the Kindle hardware to consume their digital media however, and it seems to be Apple who are bringing in new users with their iBooks option on iOS and OS X. A workaround to reach a similar reading-out-loud achievement has been to use the Voice Over support with the Accessibility options on the device. This actually works but brings with it a myriad of additional issues.

The great news is that Apple’s decision to offer a native iBooks app within OS X Mavericks means that we no longer have to drop down to an iOS device to use Voice Over. iBooks within Mavericks means that is now entirely possible, and very easy, to have the system read the book out to us with minimal fuss. To see exactly how easy it is to get up and running with this kind of functionality then why not open up iBooks and try it for yourself?

Users are able to launch the iBooks app within Mavericks and get a book open on the screen in as little as three clicks. The process then becomes as simple as putting the cursor on the screen to denote exactly where the internal voice should start reading. The next step is to select the ‘Edit’ menu option from the iBooks menu system, select ‘Speech’ from the fourth list segment and then finally select ‘Start Speaking’. The rest, as they say, is academic. Or magic, depends on how you want to look at it. 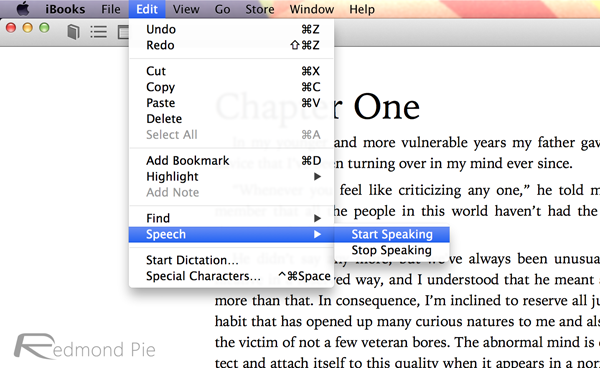 Having the Mac operating system read the book out loud is a great and very handy little feature of iBooks, but it does come with a few little caveats. Mavericks isn’t capable of turning the page so it does require a little user interaction. It will also keep reading until it’s explicitly told to stop, so be aware of that.