One of the latest tweaks to land on the ModMyi repo is the FBPrivacy package, which, as the name suggests, is one developer’s attempt to bring additional privacy measures to those jailbroken users who regularly make use of the Facebook or Facebook Messenger apps. The tweak won’t bring the stealth-like experience to Facebook that a lot of users genuinely want, but it does bring some nice little touches to the official apps that may just serve to improve things a little.

One of the first notable things about FBPrivacy is that the developer has gone to the lengths of ensuring that the bundle works correctly with the standard Facebook app as well as the extremely popular Messenger offering that is live in the App Store. It makes perfect sense, considering both apps are regularly used for sending and receiving information from friends, family and colleagues. In addition to the multi app support, FBPrivacy also comes with two included SBSettings toggles that allow us to quickly switch certain aspects of the package on and off. 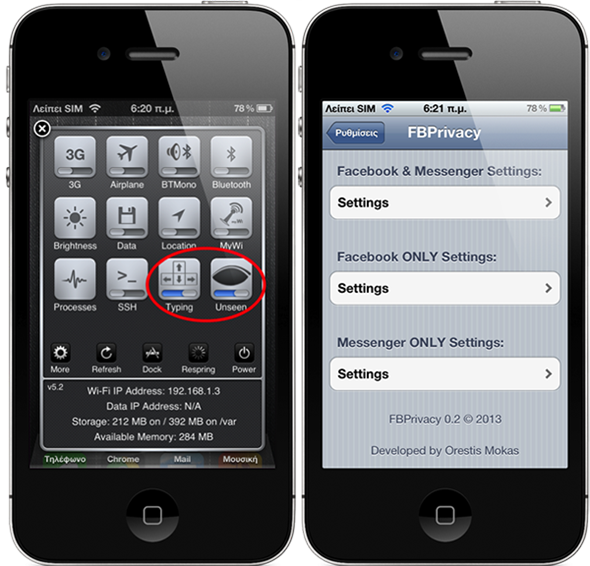 The ‘Typing’ and ‘Unseen’ toggles can be activated and applied to SBSettings, meaning that interested users can quickly decide whether or not they would like their chat recipient to know that they are typing a reply or that they have read any incoming message. The package also introduces a new Dictation feature for those who are using the Facebook apps on a Siri compatible iOS device. Rather than going down the old school route of using the on-screen keyboard to type a status update or a message reply, Siri can now be used to dictate what it is that the user would like to say.

One of the smaller aspects of the package is the ability to enable or disable a timestamp that is tagged onto each message. Some users do enjoy being able to see when a particular message was sent or received, so this could prove to be a popular addition. The package is finished off with the ability to be able to send more than one photograph through Facebook, disable all reminders and enable VoIP for both Facebook apps. Considering Facebook is the world’s largest social network, it seems like a $1.00 price tag for this tweak is a bargain to get access to these additional settings.