How To Share / Beam Any File On Android Via NFC

I cannot say it enough that Android has evolved a lot over the years that it has been out there in the market. Not only has the operating system received a major interface and performance (under the hood) overhaul, but a slew of new features has also been added to the mix, making it all the more useful to any smartphone owner out there. With the improvements in the operating system also came certain new technologies to the block in terms of hardware, and some of them joined hands such that they not only complement each other, but are so dependent that you cannot use one in the absence of other. One such technology remains, NFC.

Near Field Communication is a hardware mechanism for capable devices to communicate with each other in a more “primitive” manner, requiring physical contact (or at least, proximity) for the connection to be established. The implications of this technology, however, are far and wide, and for that purpose, NFC is the new “in” in Android devices especially. Smart Tags also use the same approach, and believe me when I say it, they are a blessing to have if you wield an Android. From a general user’s perspective, however, the most common use for the NFC chip in a device is file sharing.

Android, by default, allows sharing of only specific file types using NFC, including browser data, contacts, pictures and videos. For the rest of the items on your device, you’re restricted to the more conventional means, like Bluetooth, Email, online sync and whatnot (even hot-swapping of memory cards, in some instances). Nevertheless, NFC is really cool, and much easier to establish a connection with, so it makes sense that a user should be able to send any file via this technology. With this in mind, XDA member MohammadAG came up with File Beam. 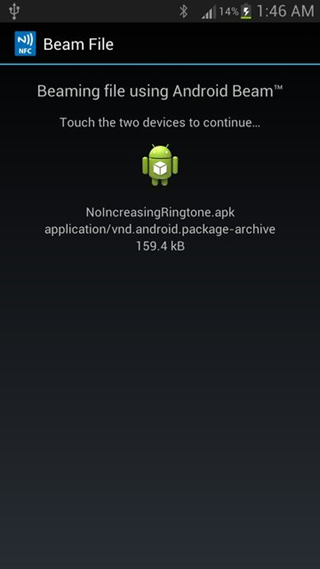 This minimalist app has only one function – enabling Android beam through NFC functionality for all file types in any file browser. Essentially, the app calls up the NFC API in Android 4.1 and above and integrates it with the “Share” menu for most apps. Hence, once you have the app installed, all you need to do is select your desired file – APK, ZIP, Document, or pretty much anything – and invoke the Share menu on your file manager, wherein you’ll find the new option to send the file via “Beam”. Neat and efficient! 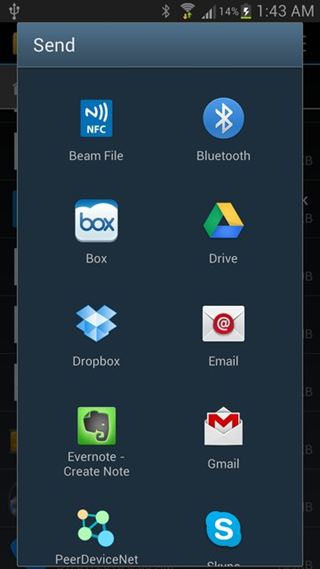 There are certain limitations to File Beam, however. For one, NFC API support was added only in Android 4.1 Jelly Bean and above, so all devices below that are already rendered moot. Second, NFC is hardware dependent, so unless both the sender and receiver devices support the the hardware chip, this won’t work. Only the sender requires the app to be installed, though. It should also be noted that NFC is only a means of establishing connection – the actual transfer happens over Bluetooth, so in the rare chance that your BT radio might not be functional, File Beam won’t work, either.

Over all, File Beam is a brilliant concept that makes an existing technology all the more useful. The app is still in its infancy, so don’t be jumpy over some minor bugs or funny behavior. The source link below provides more details.