How To Run iPhone Apps In Full-Screen Mode

If you are the owner of an iPhone or iPod touch then the chances are high that you have delved into the official App Store to browse through the hundreds of thousands of available apps that have been submitted for download by developers from all over the world. As you know, the App Store contains apps of all genres and has pretty much something to cover all tastes. It may have also become evident that the majority of apps are also built around similar navigation methodologies and use similar, albeit heavily customized, iOS specific controls.

When developing an app for iOS, developers have the option to make their app experience full-screen by adding a simple .plist setting that tells the app to remove the status when invoked. There are a few trains of thought on this, but the majority of seasoned iOS app developers recommend that the status bar should never really be removed unless there is a specific requirement for it in the app’s functionality. Although it is pretty much present all of the time when using an iOS device, people may not actually realize that the status bar contains a significant amount of information such as the current time, signal strength and the Wi-Fi and data connection. 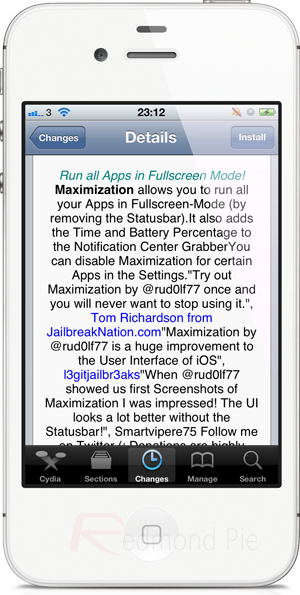 On the other hand, some people prefer the full-screen experience with the full potential of the iPhone display being recognized. If you fall into that category then the Maximization tweak within Cydia is probably something you might want to check out. Developed by Rud0lf77, Maximization basically forces every app on the device to run in full-screen mode, regardless of whether the developer has chosen to include the status bar or not. When downloaded and installed, the package’s default behavior is to force full-screen mode on non-supported apps. 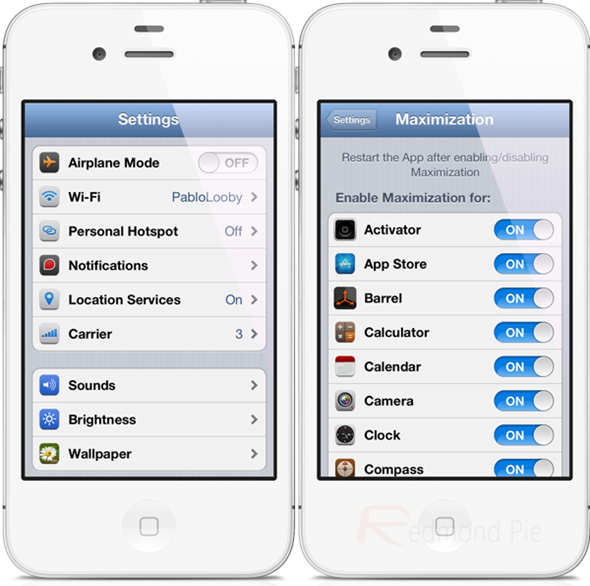 Maximization also comes with additional configurable options that live within the native Settings app. Although not extensive, the included options allows users to turn the full-screen mode off for individual apps through the use of a simple toggle switch. The app list is populated via whatever is stored on the device, meaning the settings are applicable to system apps as well as any additional downloads from the App Store and Cydia. Maximization is one of those packages that may not be for everyone. As a developer myself, I understand the benefit of having the status bar, but it will certainly prove useful to many. 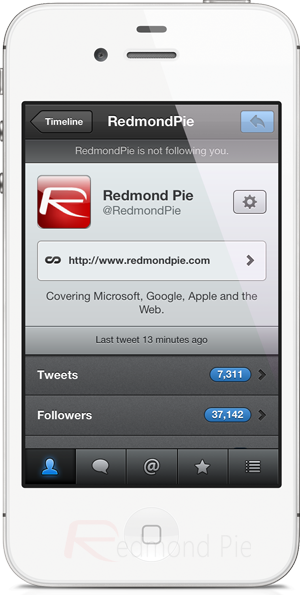 Maximization is available as a free of charge download from the ModMyi repository with no specific iOS version requirements given.