Some of the best apps that we have seen for mobile platforms like Android, iOS and Windows Phone have shown us time and time again that you really don’t need to reinvent the wheel to produce something great and usable. Developers are often guilty of trying to go a little too far with their creations and tagging features on left right and center purely for the sake of having an app that does just that little bit more. Thankfully, some developers maintain a sense of perspective and remain true to their original purpose of their creation, which is extremely evident with the simplicity of the full!screen app for Android tablet devices.

First and foremost, it is probably worth pointing out, that although, full!screen is definitely a great little app, it does require the device to have root privileges and is only intended for Android tablets. That will probably mean that it becomes a non-starter for a lot of people. However, for those that do fall into the support category, then full!screen is an excellent option as an automated, light-weight replacement for the native system bar setup that ships with Android powered slates. 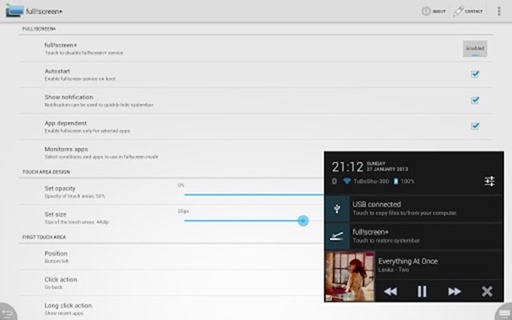 The app is essentially designed to give tablets running on Android 3.x or 4.x the ability to force apps into full-screen mode without losing access to some of the most important aspects of the system’s user-interface. Having the extra screen real estate that comes from removing the system bar might not seem like a lot, but for playing games, watching movies or surfing through the internet, it can make quite a substantial difference to the app experience. 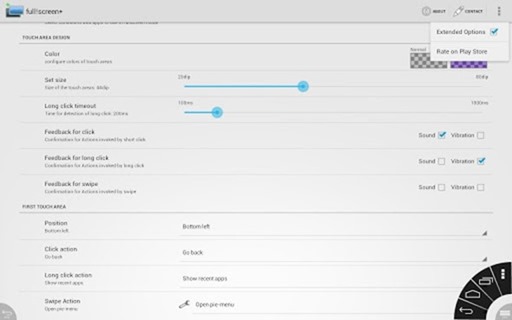 The power of full!screen comes not only from the fact that it allows true full-screen app usage, but also that it conveniently tucks away access to important sections through minimalist type buttons in the corners of the device. Each aspect of the interface is entirely customizable, meaning that it can be setup to the user’s liking. It’s also possible to customize the navigation options within full!screen by choosing between accessing things through buttons, or by using perfectly set up swipe gestures. 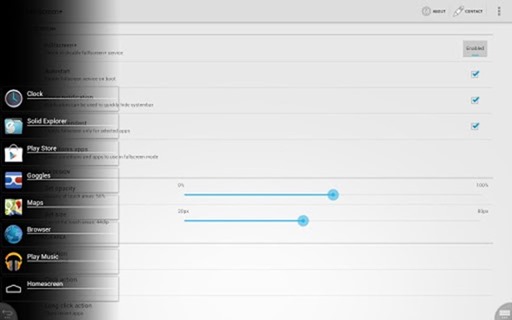 A free and pro version of the application are available through Play Store with varying support depending on the device in question.

(Source: full!screen for Android on the Play Store)