If you’re quite fussy about how your iPhone looks, you’ll no doubt have spent much of the past few weeks taking advantage of the Evasi0n jailbreak and all of the tweaks available as a result. But for some, the process of changing things around is ongoing, and even something as simple as altering the wallpaper can often take time as you scan through your collection seeking something that looks just right. Thanks to a new tweak called shufflr, though, your iOS lock screen’s wallpaper is switched to a new image every time you lock your device, lessening the likelihood of you getting bored with the same look.

Whenever you decide to change your lock screen’s wallpaper, it’s never too long before the look becomes mundane and a replacement is due. Kind of like making a new playlist in your favorite music, everything’s great at the start, but as we listen more, the time comes to freshen things up. shufflr works very much like the shuffle feature of a music player, throwing up a different random delight each time you lock your device.

If you don’t like surprises, shufflr can also be set to change photos chronologically, as sourced from your device’s Camera Roll. It works like a charm, but of course, you’ll have to ensure each entry to your photo library is appropriate for the potentially wider audience. 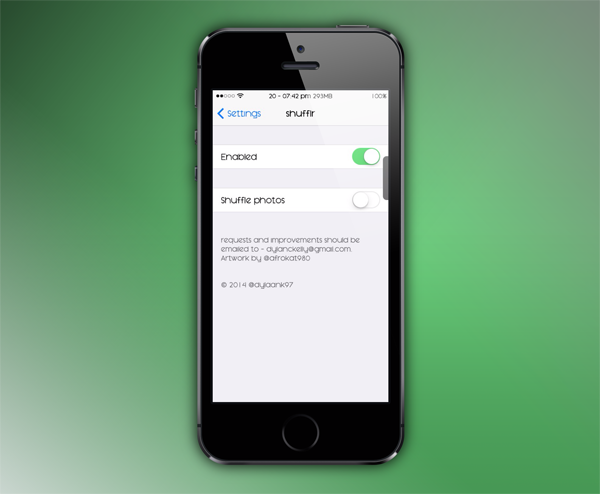 Although shufflr is already a solid tweak and does exactly as it purports, I would love to see it expanded a little. It would be nice, for example, to be able to make a folder of images specifically tailored for the purpose of wallpapers, and select that rather than the broad Camera Roll folder. Nevertheless, even in its current state, it certainly justifies the $1.49 asking price, and if you can never decide which wallpaper to select, this tweak is for you.

shufflr can be purchased over at the BigBoss repository, and once you download it, you can configure your options by heading over to the Settings app and navigating down to it.