How To Make iOS 7 Audibly Read Out Incoming Notifications

Choosing to free an iOS device from Apple’s walled garden means that users are able to extend the capabilities of an iPhone, iPad or iPod touch beyond what first-party and approved third-party apps can provide. The Speak Notification package, is a powerful tweak that allows jailbroken users to heavily customize how incoming notifications are handled.

Apple is continuously trying to improve every aspect of iOS as time passes by. The progression of the operating system over time immediately makes it clear that certain aspects of the OS are more important than others, which is evident when you look at how certain areas have been left behind. The iOS notifications definitely aren’t one of those areas, but although it has improved dramatically over the years, there is definitely still room for some improvement, which is where Speak Notification stands up to be counted.

The tweak is essentially an injection of audibility into the current iOS notification system. By bundling in a number of powerful customization options, the developer behind the package has built a tweak that not only enhances the bland text-based notification banners in iOS, but manages to do it in a way that can be entirely changed depending on the user. Incoming text messages or emails, Facebook notifications, Game Center challenges or any random banner from an installed app can now be read out by the device in a user specified format without the need to actually touch the device. 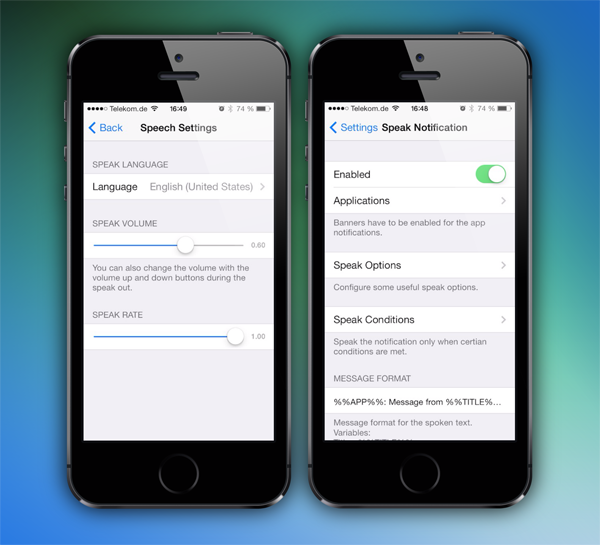 A notification structure can be defined within the settings that allows certain variables to be swapped out when the notification is received. It’s even possible to specify under what circumstances the system should actually provide the audible feedback. Reading out loud can be app specific, or defined by scenarios such as through connected headphones or only during a specific period of time. This is by no means the first time that we’ve seen an attempt at bringing this type of functionality to iOS, but it is definitely one of the best implementations that we’ve seen.

Speak Notification is a commercial package, available as a $1.49 purchase from the BigBoss repository. The tweak requires a jailbroken iPhone, iPad or iPod touch running iOS 7.0 or higher.