NCMusicGestures, a jailbreak tweak by developer Pat Sluth, brings a slew of useful and exciting music-related features to your Notification Center in one handy widget. Not only does it allow you to control your Music / iPod app from directly within the drop-down menu, but it also includes a bunch of useful social features allowing you to share your currently playing tunes with your Facebook or Twitter cronies. Full details and screenshots of the tweak in action right after the jump.

Prior to iOS 5, Apple’s notifications system was rather shambolic, but thanks to the Notification Center, it has since become easier to manage incoming messages and information from a wide range of apps. However, it’s a long way from being as functional as we’d like, and until Apple decides to roll through with some notable improvements, we rely heavily on those within the jailbreak community to keep the Notification Center looking and feeling like it’s a part of an advanced mobile operating system. 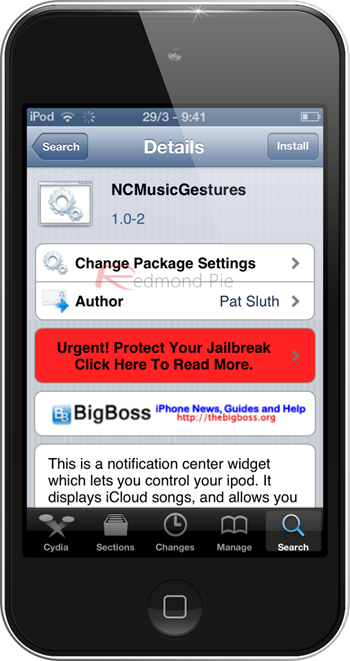 NCMusicGestures delivers this in spades, looking and feeling every bit the native implementation. It’ll show the song, artist, and album you’re currently playing, and if you’ve got the album art, it’ll show that too. Swiping the now playing information one way or the other will allow you to flit between songs, while a swipe of the upper levels of the widget will let you choose between social buttons or a progress bar. The progress shows you how long the song has been running, how much time remains, and lets you to jump to any point within the currently playing track. 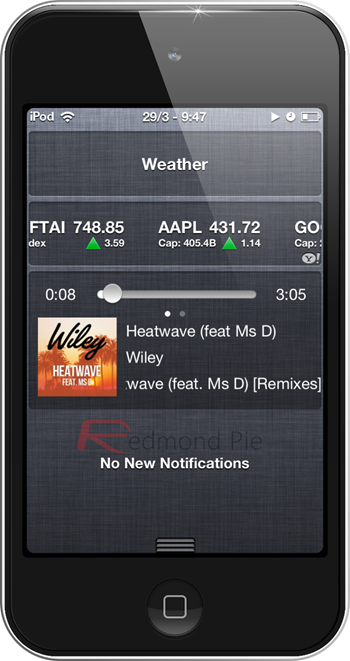 If you’re a big music fan, and do a lot of listening on your iOS device, this is almost a must-download. It’s absolutely free of charge over at the BigBoss repository, and slots seamlessly into the Notification Center.

As a big Spotify user, I would like to have perhaps seen some compatibility with that and other streaming services like Grooveshark, but that’s just me being picky. NCMusicGestures is one of the best free tweaks out there, and I highly recommend you check it out by running a search in Cydia.