When Apple launched the iPhone 5s and 5c, and along with it released iOS 7 to the masses, it was a move unlike any other that the company had made since it launched the iPhone back in 2007. You see, iOS 7 was not just a visual overhaul – it was something revolutionary to the iDevice users, who’d be accustomed to the same look and feel for their devices since they got hold of one. iOS 7, and how Jony Ive executed it, have received accolades of praise for being simplistic, elegant and beautiful, not to mention fully functional as a smartphone and tablet operating system. It may even serve as the foundation for the fruit company’s future Human Interface Guidelines for every production interface.

The latter part is exactly what prompted famed designer Andrew Ambrosino to come up with a concept for what OS X would look like, should it, too, conform to iOS 7 design elements. In all honesty, we liked the flat, minimalist look that Ambrosino’s concept had to offer, but there are people out there who’re willing to take it one step further and actually make something out of it. The guy behind BodySoulSpirit took Andrew’s concept further by creating a screensaver for OS X that replicates iOS 7 lock screen on your Mac – all for free – with further customizations possible.

The screensaver, which is available as a free download on any Mac , uses a standard iOS 7 wallpaper to begin with, and shows a clock and “press any key to unlock” text. Customization possibilities include the ability to change the clock size and style, the wallpaper and how it’s animated (or not, your choice), and font colors between black and white, depending on which goes better with your choice of wallpaper. Finally, you can modify the “Press key to unlock” text to say whatever you want – even “don’t touch my Mac!” might work! 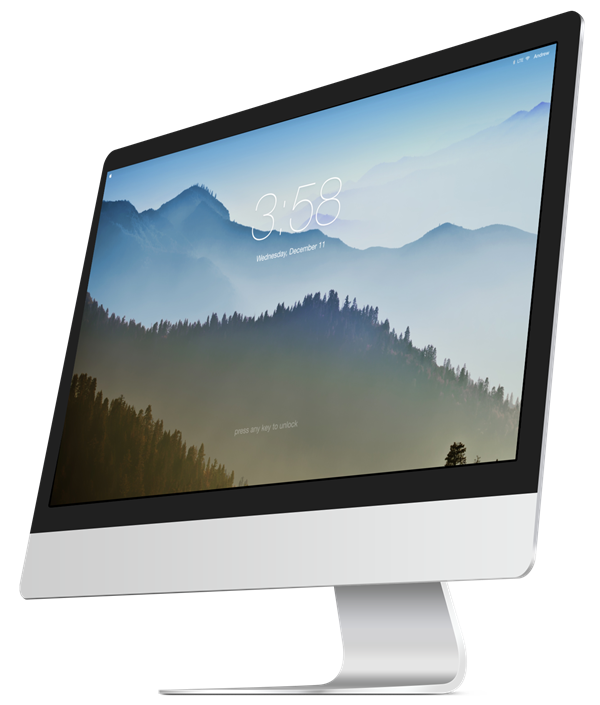 While it’s not something that would give you the real iOS 7 experience on your Mac, it is a step in the right direction, by attempting to replicate the look and feel and giving the Cupertino tech giant a message that people are interested in such a stuff. Give it a try – it’s free, so you won’t lose anything, and you might end up with a really cool screensaver in the process.

Thanks, Christian for sending this in!