One of the latest tweaks to hit Cydia is the PatternUnlock offering by Jonas Gessner, and although it offers a core feature set that we have already seen on iOS with the likes of AndroidLock, it innovates by not only implementing it a lot better but by also adding additional pro features.

The developer behind PatternUnlock has previously released a plethora of powerful packages on Cydia. WeeKillBackground Pro, ProTube, ProTube HD, Unfold and an array of additional Notification Center widgets have all made sure that he is one of the most productive developers in the community, and his latest offering PatternUnlock only serves to add to that growing stock. The tweak essentially offers a different way for users to protect and interact with their device via the lock screen through the drawing of a user-defined pattern – just like on Android devices. 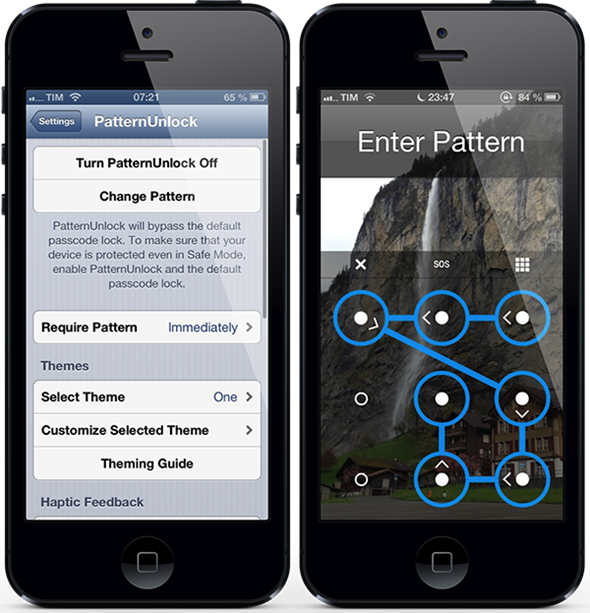 PatternUnlock replaces the native passcode feature that is offered by Apple through iOS, and instead, implements a security check by making the user draw out a pattern. Users always have the option to either enable or disable the pattern check as well as being able to specify their own custom pattern through the settings section of the tweak. Custom vibrations have been included to provide haptic feedback to the user as well as the ability to customize the look and feel of the tweak using one of the five included themes.

As well as looking great and offering a fun experience, PatternUnlock is also quite serious about security. The tweak uses AES-256 bit encryption in conjunction with the Keychain on the device itself to securely store the saved pattern. It can also be used with the native passcode lock feature enabled, meaning that if the device ever inadvertently enters Safe Mode and PatternUnlock is bypassed, then passcode will take over and still offer protection. A new take on an existing idea and definitely one that’s sure to be a hit with jailbreak fans.

PatternUnlock is available as a $1.99 download from the BigBoss repository and requires a jailbroken iPhone, iPod touch or iPad running iOS 6.0 or above.