How To Get Android 4.2 Emoji Keyboard On Any Device

The biggest problem with text-based conversation or communication is the lack of all other elements that help in conveying the correct message. For instance, you might jokingly make a remark over something, and the tone of your voice and the emphasis of syllables will tell the listener exactly how you intended it. Likewise, a joke might not really be a joke, which will be demonstrated by your body language. According to communication experts, 70% of the interpretation of our messages is defined not by words, but by how they’re delivered. This is a serious hurdle when you use text messages, IM, email, or any form of the written word.

There are workarounds in life for almost everything, and the issue that we discussed above remains no exception. Emoticons were developed to add emotion to writing, and they have become fairly mainstream, thanks to SMS, email and instant messaging (you still won’t find them a lot in written word). However, those were the days when the communication devices (especially the mobile ones) relied solely on ASCII characters, and as they have evolved, so have the emoticons. We now like to call them Emoji – tiny colorful pictures that go beyond merely conveying facial expressions, and include a lot of other stuff that you may decorate your conversations with. Beyond doubt, Emoji add an entirely new dimension of feeling to how we converse in writing.

Emoji are widely available across all major smartphone platforms, and even come as a part of several major players’ apps (hint: Facebook app for Android or iOS). With iOS 5, Apple even included a built-in rich Emoji keyboard with iOS 5, to make it more convenient for users to enrich their messages. Android, however, didn’t play much importance to this, at least until now.

This hasn’t been a really big problem for Android users, since you could’ve always opted for a third-party offering. However, Google has now taken this a step further – in the right direction, of course – with Android 4.2. Thanks to the folks over at XDA Developers, who’ve been actively scouring the dumps for latest Jellybean, we now have an extract of the built-in Emoji keyboard that comes with the 4.2 package.

The keyboard is laden with a variety of Emoji, and has a two-tone black and white interface. It sports layouts of 10-key and QWERTY, and while fine is usage, lacks the stock keyboard’s gesture typing. Oh, and since it works as a separate input method, you can’t really use it side-by-side with the stock offering, much like Apple’s rendition of the same. 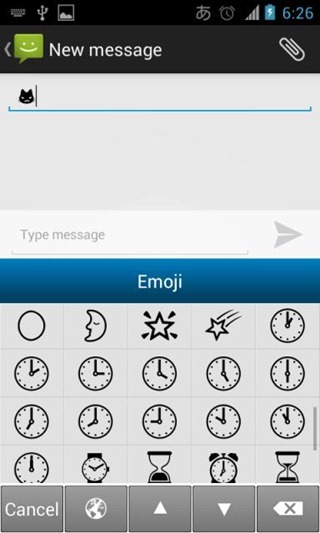 The keyboard was actually made available for HTC Desire S as a custom-recovery-flashable ZIP, but can now be grabbed as a universal package for all Android devices. Head over to the source link below to download the Android 4.2 Emoji keyboard, and just flash it to your device through a custom recovery such as CWM.