How To Enable Automatic App Updates On iPhone

It’s pretty fair to say that the average iOS device user has a significant number of third-party apps installed on their device. Regardless of whether it’s an iPhone, iPod touch or iPad; the chances are that the user has browsed through the App Store, found the apps that interest them and gone through the installation process multiple times. Not only does installing different apps mean enhanced functionality on the device, but it also means that sooner or later there will be a large amount of updates for those apps that filter through from the App Store. We should all know from experience that those little App Store badges can become quite annoying if the update isn’t installed right away.

The new Auto App Updater package on Cydia for jailbroken devices is more of a fully-functioning app instead of a small system based tweak, but there is obviously no way that Apple would allow it to reside on the App Store for various reasons. The core functionality of the app basically allows all App Store updates to be automatically and immediately downloaded and installed to the device. 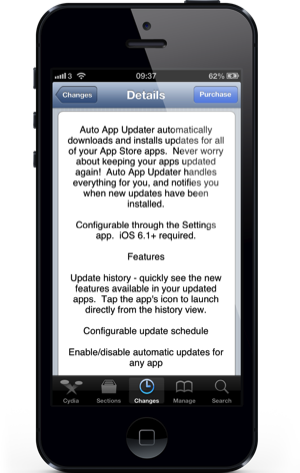 After the package has been installed, it is necessary to head on over to the native Settings app to fine tune the app and make sure that it performs to our own specifications. Available options include being able to toggle the package on or off, as well as set an update interval that will check for updates and install based on the specified time. It is also possible to ensure that the app only downloads any available updates when the device is connected to a wireless network rather than a cellular data connection. 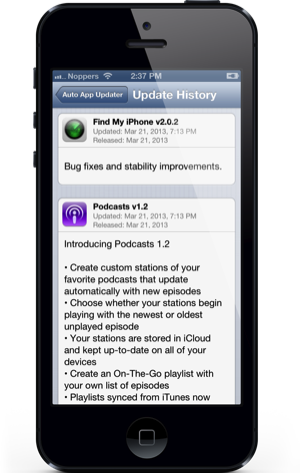 One of the great features of Auto App Updater is that is also allows users to retrospectively go back into the package and see the change logs that accompanied any download. Rather than going through a stream of automatic downloads and then worry about what new features were included, it is possible to get access to everything through a historical timeline. 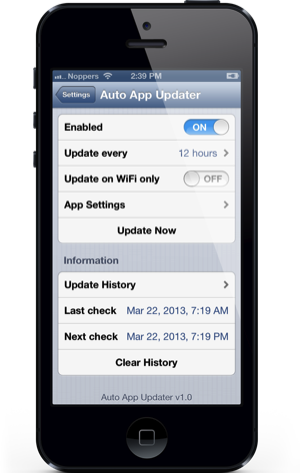 The Auto App Updater package is available as a $2.99 download from the ModMyi repository and requires a jailbroken device running iOS 6.1 or above.