The public release of iOS 5 in October 2011 brought a number of new and exciting features for the average consumer as well as iOS developers. A number of these new features are well documented and are heavily featured whenever iOS 5 or the iPhone 4S are mentioned and include things like the Siri, iCloud integration and the new Notification Center. iCloud is more often that not, referred to as a feature in its own right, which is generally not a problem, but it is worth noting that iCloud is effectively a wrapper for a number of new additions to the iOS platform.

You can think of iCloud as a technology which stores your music, documents and images and then has the ability to ‘push’ all of that stored content to any of your compatible devices. The process is automatic, seamless and effortless just as any cloud service should be. Contained within the iCloud service is ‘Photo Stream’ which basically offers cloud storage for all photographs taken on the device. When activated, Photo Stream automatically uploads all photographs taken on the device camera and automatically pushes it to other iCloud-enabled devices without the need for manual synchronization or any leg work on the users part.

The Photo Stream service is undoubtedly a great way for all users to keep photographs in sync between multiple mobile devices and computers, but to use on an iMac or MacBook; it requires you to have the newest and updated version of the iPhoto software installed. Some Mac users, including myself, are not the biggest fans of using iPhoto, so the ability to update without the need for this software would be the perfect solution. 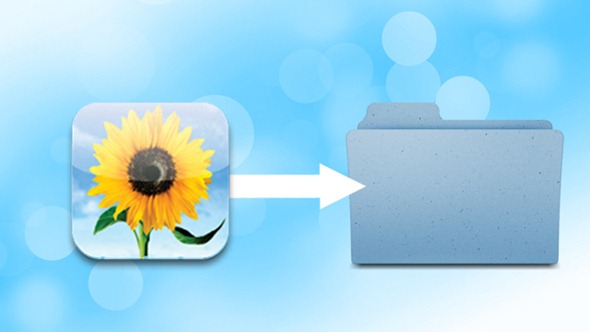 A member of the Macworld forum, known as DJF3 has come up with a clever way of using the Apple Script language to automate the process which negates the need for iPhoto to be used at all. The process involves creating a tiny little script using Apple Script which is a handy scripting language created by Apple and made popular due to the fact that it generally follows normal speech conventions. To set the script up, you will need to open the Apple Script editor by going to ‘Applications >> Utilities‘ and paste, or type in the following code:

Make sure that before you save and exit the script, you change the target path folder ‘Macintosh HD:Users:user:Pictures:MyStream‘ to the folder on your hard drive where you want the images to be stored. Once you have changed the code to your specific requirements, click run in Automator and the script will work its magic by copying all of your Photo Stream images to the targeted folder on your Mac. The Script is a very handy little way to bypass the official method of storing your Photo Stream images to a folder should you not like using iPhoto.