It seems that iOS-based text editing tweaks for jailbroken devices can be compared to London buses, they keep you waiting for significant periods of time and all of a sudden two of them would show up at the same time. That is the exact same thing which has recently happened in Cydia with the release of the SwipeShiftCaret tweak as well as the SwipeSelection offering. 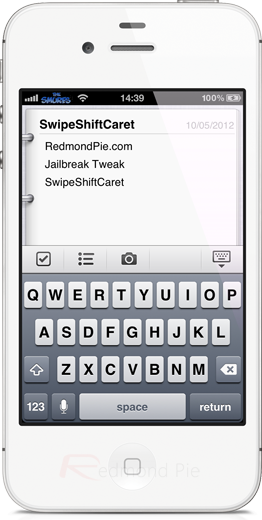 Both packages are available to download free of charge from Cydia and both seem to have been built with exactly the same end goal in mind – to make text editing on an iOS device more user friendly and accessible. SwipeShiftCaret comes from developer r_plus and makes itself nice and comfortable in any area of iOS that allows text to be entered and edited by the user.

In a stock installation of Apple’s mobile operating system, selecting, highlighting and editing text has proved to be somewhat cumbersome and difficult to use at times. Especially for those who may suffer from having slightly chubby fingers. This particular problem with the OS has been highlighted recently thanks to a concept video that has been doing the rounds, and SwipeShiftCaret seems to implement the recommended suggestions extremely well. 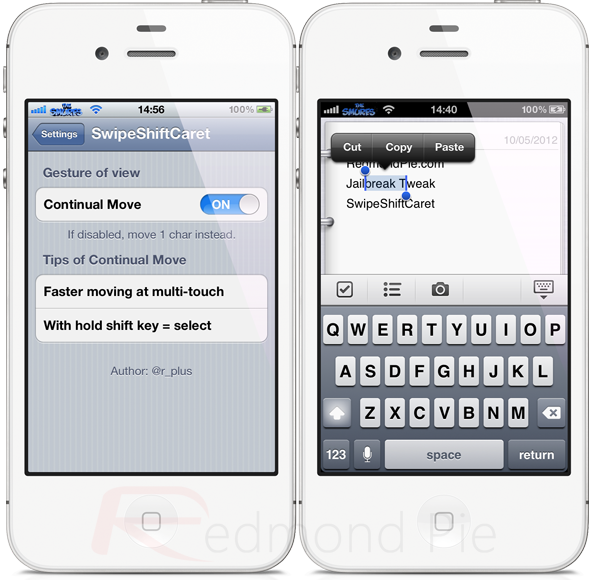 Once installed, SwipeShiftCaret doesn’t append the home screen with any additional app icons but does give itself its own little nest within the native Settings bundle. The tweak settings allow one aspect of the installation to be configured, which relates to the continual moving aspect of the character spacing caret. The package itself brings three individual features to iOS text editing, which are; being able to move the spacing caret with a simple drag gesture of the finger or move the caret in a continual motion by dragging slowly along the text string.

The final offering, and perhaps the most useful one, is being able to depress the shift key on the virtual keyboard and drag along the string of text to be able to highlight it. This simple drag gesture is something which replaces the previous method of pressing-and-holding and then having to manipulate those little blue pins that appear on the selected text.

SwipeShiftCaret is available as a free of charge download from the BigBoss repository and requires a jailbroken device running iOS 5.0 or above.