How To Completely Remove Metro UI From Windows 8

Microsoft has put a great deal of development blood and sweat into creating the Metro interface of Windows 8, and whilst many have taken something of a shining to the new look of the title, others have been less than impressed with some of the features being removed (or added) over previous releases of Windows.

With the Redmond outfit having stuck with its generic Start menu look for decades, it’s unsurprising some aren’t too thrilled about the apparent design overhaul, and if you’re a tad scared of being ushered into the swirling vortex of the unknown, then don’t fret – help is at hand.

If you’ve become nicely acquainted with Windows 7 which, let’s face it, is Microsoft’s best operating system to date, and you don’t feel the need to jump on the Metro bandwagon, you may wish to try RetroUI. As the name quite overtly entails, you can keep the same interface you’ve become accustomed to, whilst also grabbing the other benefits of Windows 8, such as faster boot-up times.

Not only is Metro quite clearly better suited to the touchscreen, tablet interface, but it would seem a little harsh that everybody has to embrace the new look, or forever hold their peace. With RetroUI, such a gesture will not be necessary, for much like the many apps already in existence offering some solace to alienated Windows 8 sufferers, RetroUI will remove the tiled interface completely, offering an easy option of having a Windows 7-esque desktop view to the user.

Of course, if Microsoft didn’t beset the changes upon Windows users, it’s arguable that very few would jump on board, but thanks to RetroUI, you can flit between Windows 8 and “Windows 7” whenever you so wish.

Although Metro is certainly a step in the right direction in terms of the devices on which many of us perform computing tasks, one suspects the majority of Windows users will be in for a massive shock when they try and get to grips with Windows 8 on desktops with mouse – especially those not having heard of the new Metro look, at all. 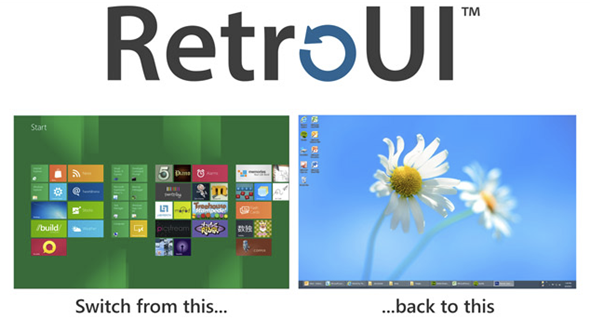 But as Anthony Clark, VP of Business Development at Thinix – the outfit behind RetroUI – adds, only a minority of specially-written Metro apps work within the Metro infrastructure of Windows 8. Thus, users must exit the Metro desktop in order to run most apps, and as Clark continues:

RetroUI eliminates this inefficient back-and-forth problem by providing a way for users to login directly into the classic Windows desktop – skipping over all the unneeded Metro features.

You can grab it right now via the link below. It costs five bucks for a license stretching across three PCs, which certainly isn’t a bad deal – particularly if you’re apprehensive about approaching Windows 8 full-throttle.