Everyone loves it when they get something for free, right? That free gift is made even better when it actually turns out to be something functional and useful that could make certain aspects of interacting with the iPhone easier. The Compose package from Cydia definitely falls into the bracket of being free and useful, making it a prime install for those operating a jailbroken device running a variant of iOS 6.x.

Compose is one of those packages which does pretty much what it says on the tin. The tweak has been built as a Notification Center widget that makes its home in the pull-down notification menu that houses native iOS widgets and all notifications. The public definitely approved it when Apple decided to revamp the notification system on iOS and introduce NC. That praise was taken even further when the Cupertino company introduced the extremely handy social sharing widgets for Facebook and Twitter as well as finance and weather tickers.

Compose is essentially an extension of that native functionality, and works by allowing the user to quickly compose a new email or text message with the single tap of a button in Notification Center. One of the great things about the tweak is the fact that it stays true to the existing aesthetics of iOS, making it actually look like an official implementation by Apple. It also helps that the package will be fully compatible with other framework type tweaks like Dashboard X, which means it can essentially be executed from any home screen as well. 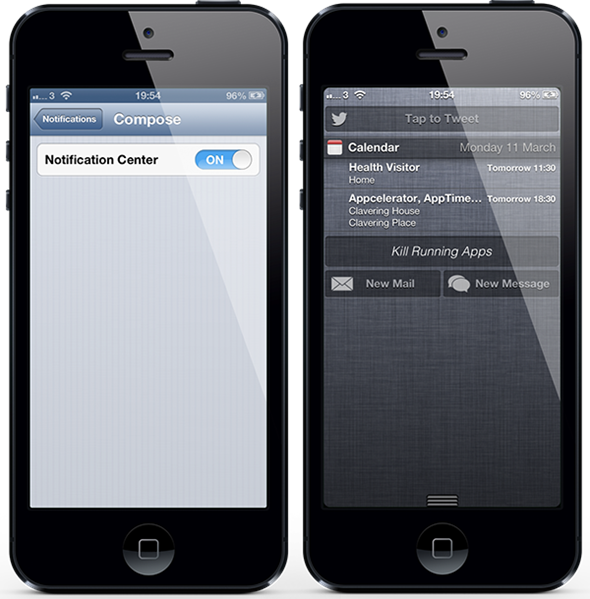 After the package has been installed, it doesn’t come with any additional preferences or app icons on the home screen. To get up and running, it is essential to head over to the Settings app, select the Notifications option and find the Compose entry in the list. The associated toggle needs to be set to on before the tweak can be used. It’s free, it looks exactly like it’s a part of iOS and it definitely brings useful functionality to those who send out messages and mails a lot.

The Compose package is available as a free-of-charge download from the ModMyi repository and requires a jailbroken device running iOS 6.0 or above.