When it comes to mobile smartphones and the operating systems that power them, there is always going to be a great divide from users who prefer one platform over the other. We all know that the two largest mobile OSes in the game are iOS and Android, with each one having its own set of pros and cons when compared against the other. Apple fans will argue that iOS is a more powerful and intuitive OS, whereas Android fans love the control they have over their devices as well as the ability to have live widgets on their home screens.

I can’t argue with the benefits of widgets, as they do – in some cases – provide some great additional interactivity with the device, but the more experienced will know that jailbreaking an iOS device opens the system up to a whole world of powerful widgets. With that said, the Facebook Live Widgets package that has just landed in the Cydia store is an attempt by Bluemetal to bring some dynamic social network type functionality to the home screen and lock screen of a jailbroken iPhone or iPod touch. iOS is one of the largest mobile platforms in the world and Facebook is the king of the social networks, so what could possibly go wrong? 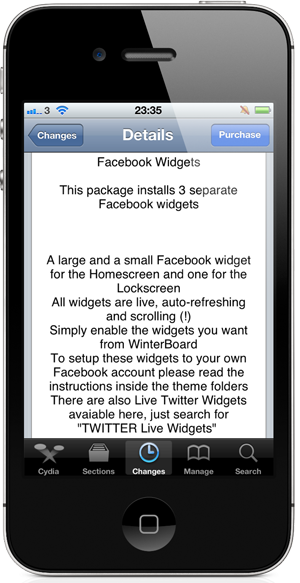 The new tweak is essentially a package that contains three individual widgets which allow the user to interact with Facebook and their timeline in a way that isn’t possible on a standard installation of iOS. The first two widgets are intended for use on the device’s home screen and differ only in their size. The physical dimensions of the widgets are designed to allow the user to either have two or three rows of app icons as well as the widget itself.

The third and final widget is intended for use on the device’s lock screen and commands the full available screen real-estate between the clock at the top of the display and the slide to unlock image at the bottom. In terms of functionality, all three widgets are the same and offers live streaming from the inputted Facebook account. After installation, the widgets need to be activated through the WinterBoard app and are refreshed automatically, and scrollable. One thing to consider when using these widgets is the possible additional drain on the device’s battery, considering they are always refreshing. 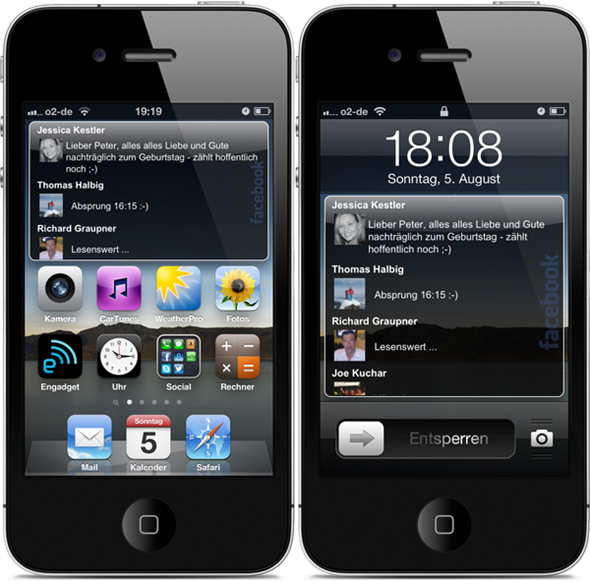 The Facebook Live Widgets package is available as a $0.99 download from the ModMyi repository with no specific mention of iOS version requirements.