Those who own an iPhone 4 are probably aware of its extremely high resolution display that makes text and images appear crisper than ever. This feature, known as Retina Display, has been rumored to be coming to the next-generation iPad and has now been spotted in the final version of OS X Lion.

While not enabled by default, references to a retina display can be found on the system’s Display settings within the System Preferences application. Along with the standard resolution that the active monitor is capable of handling, there are now a few other options labeled as "HiDPI", or "High Dots Per Inch". In order to make these options display, users must have the newest version of Xcode installed and run the Quartz Debug app within the Developer directory. Once the application is running, the new settings will automatically appear. 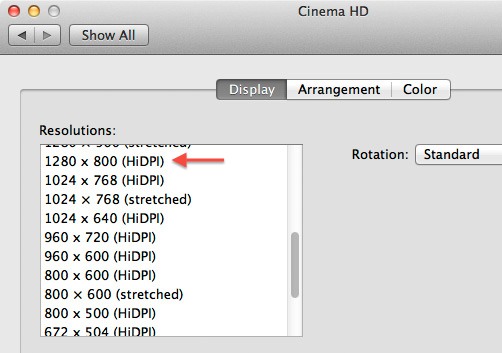 Sadly, this feature is rather broken at the moment, which is not surprising, since no Mac computer, and in fact no computer in the industry, currently is capable of displaying such a high resolution. When selecting the HiDPI options, only an unusable zoomed in view of the interface will be displayed, not a true high-resolution desktop. On Macs with supported screens, however, a true high-resolution desktop should be displayed.

High-resolution hardware should still be quite a few years off. Back when Apple released its first high-resolution device, the iPhone 4, it was considered quite an achievement to ship such a high-quality screen for such an affordable price, just before reaching the 4th generation iPod touch, which was released just a few months later with a similar (and similarly-sized) display. The next-generation iPad is also expected to sport a higher-resolution "Retina" display, although nothing is confirmed. What’s holding Apple back at the moment is the price: packing more pixels on a similarly-sized screen is quite a challenge. Selling devices with full-sized screens, such as MacBooks, iMacs and Cinema Displays for an affordable price can be incredibly challenging at the moment, yet we’re definitely heading in that direction, maybe in only a few years, given that OS X Lion already seems to support this feature, which suggests that we’ll see a high-resolution Mac before the system is replaced (supposedly in 2 years time, although nothing is confirmed, of course).