With Apple’s official announcement of iOS 5 just around the corner (watch this space!), concept videos for possible UI features are cropping up from all over the place. We showed four such concepts yesterday and we have another one today!

A concept UI feature, appropriately titled, Dynamic Icons has the ability to, well, display different information on an app’s icon depending on what Push Notification it pushed last, à la home screen Tiles in Windows Phone 7. 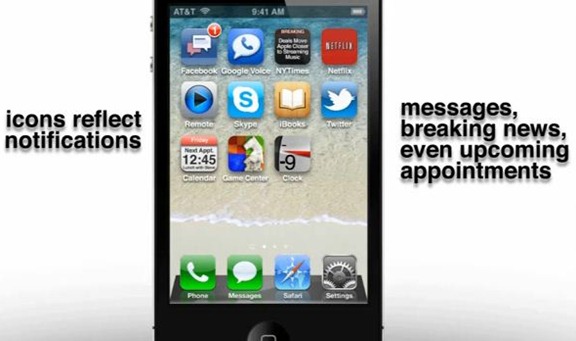 Quoting the person behind the concept, Jan-Michael Cart:

Users have the option of turning on these "dynamic icons" by going to the Settings. Icons are granted the ability to change their appearance given a variety of push notifications. In turn, once the notification badge is pushed, a new icon file is displayed. These icons can have text (albeit small, but legible text due to the Retina Display), images, a mixture of the two, or something constantly changing (but based on an internal source, not using cellular data — a la Clock app that displays time).

I thought of another alternative to the widgets as well. This time, it’s called "App Preview", or just "Preview". Double tap anywhere in the grid pattern that is not an icon (one handed), or pinch-to-zoom (two handed), and the icons immediately expand as if your icon grid is 2×2. The same information and interaction typical of a widget is found on the app icon itself — the App Preview comes with the app download. No need to download anything more.

Cart doesn’t stop at this. He has also brought up an alternative to widgets which he calls App Preview. It works by zooming in on the app’s icon to show information typical of widgets right on the icon itself. App Preview won’t have to be managed separately (as is the case with Android) since the preview is coded with each app.

I believe it’s certainly a unique approach to handling notifications and widgets, but it is the bit about App Previews that really isn’t what one would expect from Apple. The dynamic icons, though, is a fine idea and it would be a great addition to iOS 5.

WWDC will kick off on Monday, 10am Pacific Standard time. Apple is set to announce the next generation of iOS, their Cloud service (which ought to store all your music in the cloud) and OS X Lion. We’ll be posting the good news as soon as it happens!