Grand Theft Auto 5 has been a monumental success for Rockstar Games, having broken all sorts of sales records following its release late last year. With a next-gen version for Xbox One and PlayStation 4, as well as the PC also in the pipeline, GTA fans remain very much engaged with this immensely popular title, and none perhaps more so than the guys at Zapruder Pictures. In Spain’s capital city of Madrid, the folks of Zapruder have parodied the entire trailer in real life, and the result, as you’ll see below, is truly something to admire.

Although this frame-by-frame replication of the official trailer is pretty darned accurate, it’s fair to say that Rockstar really had to pull out the stops in taking care of eager GTA 5 enthusiasts last year. What was originally supposed to be a spring release didn’t actually arrive until the fall, and while the publisher’s promise that the title would be worth the wait was, thankfully, underlined by the quality of the finished product, Rockstar released countless trailers and in-game teasers in order to keep fans interested while the finishing touches were applied. 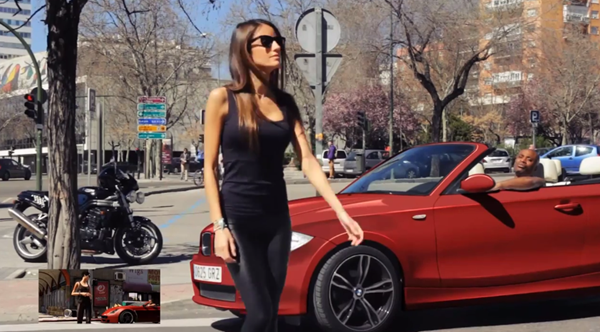 But as we continue to wait for the up-scaled versions for our beloved next-gen consoles, Zapruder’s take on the GTA trailer is quite spectacular. Such is the realism that Rockstar has managed to achieve in GTA 5, that many of us have become entranced into thinking that Los Santos is a real place, and while the fictional location is said to be based on Los Angeles in the United States, Zapruder has done a pretty good impersonation job right from Spain.

A lot of attention to detail has been paid here, and just for a split second – particularly in the shot with the red BMW – it almost feels as though you’re watching a true GTA trailer rather than a copycat effort.

Rockstar hasn’t yet begun its campaign to once again ramp up the hype behind the high-def remakes of the iconic title, and while the following clip does no harm to the upcoming title’s prospects, it may also have GTA fans flocking to Madrid for their vacations this summer.

Below, you can check out the trailer in all of its glory, and as ever, be sure to leave your comments via the usual mediums.