It’s that time of the year again, folks, when Apple releases the next major release of its desktop operating system. The latest – OS X 10.8 Mountain Lion – has just been released on the Mac App Store for the reasonable price of $19.99. As I type this, hundreds of thousands of enthused Mac owners are downloading the OS, oblivious to the fact that some of their favorite apps may not work well after the upgrade.

Yes, it’s something I’m sure many of you learned while upgrading to Snow Leopard. Back in 2009, many apps such as Aperture 2.2, Keynote 2.0 were completely incompatible and certain printers / scanners refused to work properly. There were also general stability issues at the start which were later remedied. Inevitably, Mountain Lion too will face such problems which will be discovered as the user base grows in number.

Keeping that in mind, the folks over at RoaringApps have created an exhaustive list of Mac apps that have been tested working or non-working under both 10.7 Lion and 10.8 Mountain Lion. The list includes all sorts of apps from games such as Absolute Backgammon to industrial software like Adobe Photoshop.

You can sort the list alphabetically, by release date, last updated date, iCloud and Retina graphics support. If you’re in the mood to go through the entire list, you can aid your reading with status indicators and see only compatible or incompatible apps. On the other hand, you can easily check your favorite app’s status by using the search box at the top. 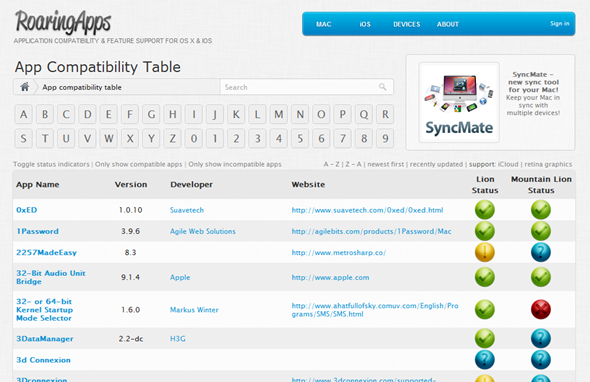 The list is crowd-sourced, meaning anyone and everyone can add new apps detailing their compatibility status and feature support with Lion and/or Mountain Lion.

OS X Mountain Lion – like Lion before it – closes the gap between Apple’s desktop and mobile operating systems. It brings over previously iOS exclusive features like Notification Center, iMessage, Voice Dictation, Twitter and Facebook integration, Game Center and AirPlay Mirroring. All in all, it’s one of the most attractive OS X upgrade yet especially for those of you who own an iOS device (Just about every Mac owner has an iPhone/iPad).

You can head over to this link to download OS X Mountain Lion for your Mac.