While it’s true that the iPhone release that we recently endured is perhaps the biggest thing to happen in technology in the month of September, gamers would no doubt offer a dissenting word on the subject.

Released a few days before the iPhone 5s and iPhone 5c, Rockstar’s Grand Theft Auto 5 has taken the gaming world by storm, racking up top notch reviews and record sales left and right. In fact, GTA 5 managed to rake in a cool $1 billion in during its first three days of release alone, which is huge if you’re asking us. Impressive stuff indeed. Players of GTA 5 will perhaps have noticed that the game’s developers have managed to take one or two swipes at large technology companies like Apple, Google and Facebook, but most will have missed one or two more subtle digs at the smartphone market in particular.

In order to make sure that everyone can bask in the in-game jokes that the Rockstar developers have worked so hard to create, one Reddit user has taken some screenshots to show how Grand Theft Auto 5 tries to depict iPhone, Android and Windows Phone users. In short, it’s stereotype-tastic.

Take the screenshot showing a character with an iPhone, or as the game calls it, an iFruit. The guy in the screenshot’s wearing a suit and wouldn’t look out of place on Wall Street. The implication, obviously enough, is that anyone with an iPhone has more money than sense. Some of us own iPhones here at Redmond Pie, and we certainly wish we had more money than sense but alas, we won’t be buying that private jet just yet. 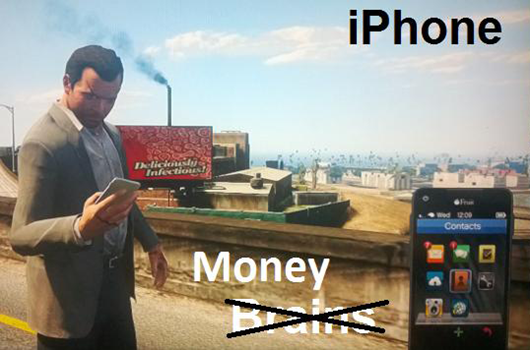 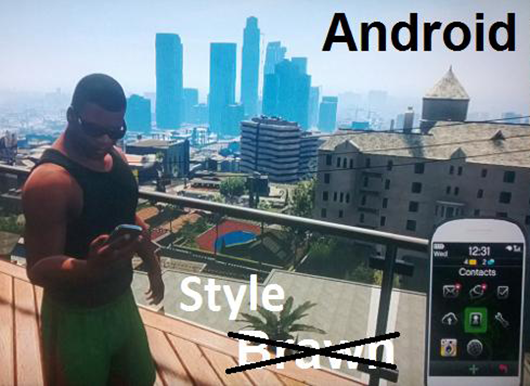 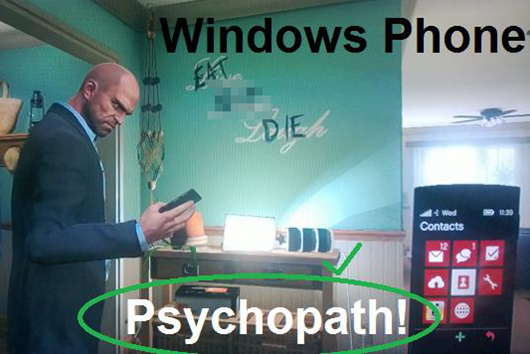 Still, it could be worse. We could be like the guy using a Windows Phone. That poor guy’s your stereotypical maniac, complete with all the trappings that go with it.

We doubt the folks over at Microsoft find that quite as amusing.

But still, we managed to get a few laughs out of it, considering we’ve been covering tech long enough to know how users of particular smartphone platforms take swipes at their adversaries.

What do you think about the portrayal? Is it just wrong, or did Rockstar did a marvelous job at it? You know where to drop your thoughts and opinions!