When it comes to chopping up fruit, a simple kitchen knife will usually do the trick, and although some fruits have particularly tough skin, the Samurai sword is seldom necessary. Luckily, nobody told that to Halfbrick Studios, who, two years ago, created the immensely-addictive iOS marvel that is Fruit Ninja.

The concept, like most successful mobile titles, is extremely simple. Fruit flies in the air at random, and, using your finger to direct the sharp sword across the screen, you have to slash as many as possible – intricately avoiding the bombs which end the game. The more fruit you can slash per stroke, the more your combo bonus – and subsequently your score – rises.

With an equally addictive multiplayer plus a hatful of unlockables and achievements, it’s not difficult to see why Fruit Ninja has been up there with Angry Birds, Cut the Rope et al since it first dropped back in 2010. To celebrate its second anniversary, Halfbrick is offering a free promo code to anybody heading over to its website and entering their email address.

After offering your details and passing a CAPTCHA, all you need to do is sit tight and wait for your promo code to arrive, which can then be redeemed at the App Store for a free license of Fruit Ninja.

I’m sure, for the few of you uninitiated, the concept of the game sounds rather repetitive, childish, or way too simple to be addictive, but I can assure you that simply isn’t the case. There’s certainly a perverse pleasure in using excessive force in chopping up fruit, and with the sheer number of unlockable features packed into the title, I challenge you to play it for ten minutes and then put it down. 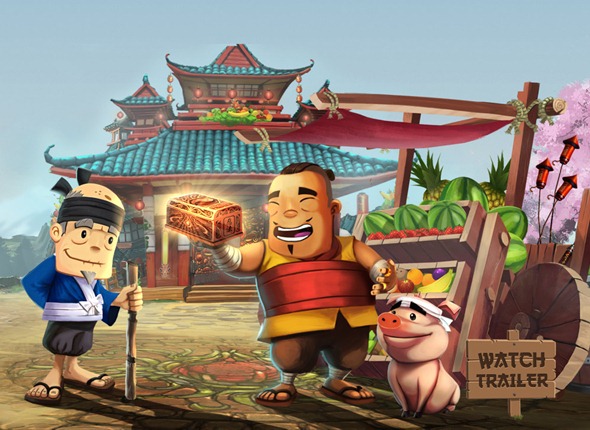 It would have been a little nicer if Halfbrick had just pushed the game out for free for a couple of days rather than making consumers do a little donkey-work, but nevertheless, this is one freebie you certainly won’t want to pass up. Even if you’ve already purchased it, why not generate a promo code and offer it to a friend?

To claim your free copy, head over to anniversary.fruitninja.com and follow the instructions.