We’ve been witness to a number of changes in the past that have been introduced by Apple as part of their plan to enhance iOS and make it a more usable mobile operating system for its millions of users around the world. One of those changes that well and truly split opinion at the time was the introduction of the ‘Camera Grabber’ on the iOS lock screen that essentially allows users to launch the Camera app without having to unlock the device. Some feel that Apple should natively allow users to change the function of that particular button, but as we know where there is a will, there’s a generally a jailbreak based way.

The Grabby package is Ryan Petrich’s answer to this much complained about problem and although it isn’t the most comprehensive tweak we will ever see, it definitely takes a real complaint that users have and resolves it in its own way. When installed, the Grabby package doesn’t append the home screen with any additional icons, nor does it make any immediately evident visual changes to the lock screen of the device. However, the power of the tweak comes from its new preferences panel within the Settings.app as well as a new gesture based action when the grabber is tapped and held. 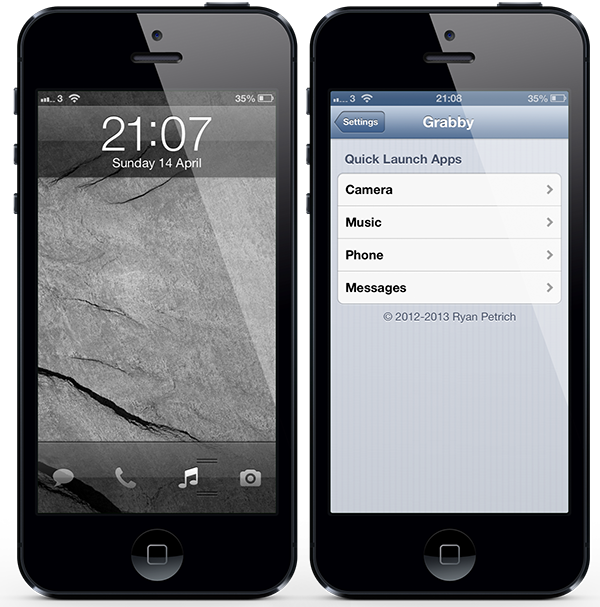 Tapping and holding on the camera grabber icon and then dragging left opens up a new set of options that allows different apps to be launched when dragged up toward the top of the display. As well as the ability to open the Camera app, Petrich has also added the ability to quick launch the Music, Phone and Messages apps from the lock screen. If those apps aren’t really your cup of tea or amongst the most used apps on your device, you can always change them from the Grabby preferences from the Settings panel.

Any of the native, App Store or Cydia based apps can all be set through the preferences panel making Grabby a very simple and usable package. The holding repository can be added by loading Cydia, navigating to Manage >> Sources and adding http://rpetri.ch/repo as the repository URL.

Grabby is available as a free-of-charge download from the Ryan Petrich personal repository with no specific iOS version requirements being given.