Motorola’s highly anticipated Moto X is set to be officially announced on August 1st, but at this rate there won’t be much left to announce. After leak upon leak over the last few weeks, today sees yet more images of the unannounced Google Android-powered handset.

This time the images come as rendered press shots. for both black and white models, and they give a good account of what the shipping product will look like. Powered by Android, the device is set to run a stock experience, though the shots do appear to suggest that there may be one or two subtle flourishes added by Motorola along the way. Check out that transparent navigation bar, for example.

Set to be less of a power house Galaxy S competitor and more of a people’s phone, the device is going to be aimed at the mass market rather than those playing at the top end of the smartphone arena. Clearly an attempt at shifting a device in high volume, the Moto X may just manage to do what Google’s own Nexus lineup has not successfully achieved – real market penetration. 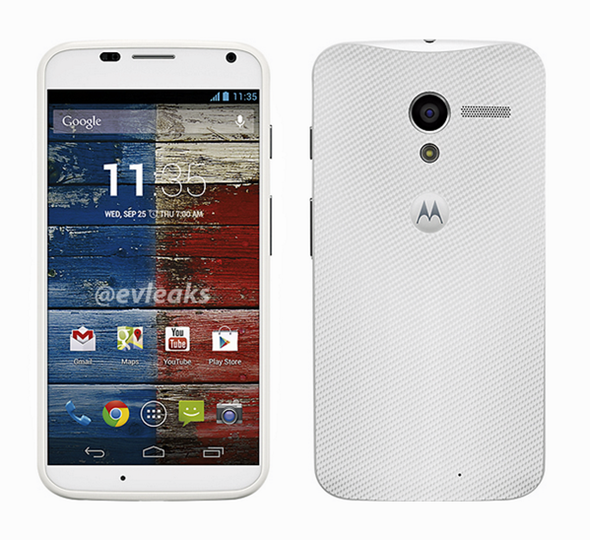 The fact that such a middling device, at least in the case of specifications, makes it interesting to note just how interesting the Moto X appears to be. The first real Motorola handset to be released since its acquisition by Google, the Moto X was hoped to be a Galaxy S4 and HTC One competitor by many. That now appears to not be the case, something that will be a disappointment for many who had held off buying the two aforementioned powerhouses in favor of waiting to see what Motorola and Google had up their sleeves.

The Moto X is expected to reach retailers at the end of the month, and those retailers are expected to offer the handset at very compelling prices. Whether that’s enough to sway buyers in its direction though, remains to be seen.

We’ll have more on the Motorola Moto X in the lead up to the event on August 1st.