Google I/O 2012 has so far exceeded all expectations I had from the event. The number and variety of announcements is enough to rival Apple’s at WWDC. So far, we’ve seen an updated version of Android (4.1 Jelly Bean), a Nexus tablet, a show-stopping Google Glasses demo and, the news we will be discussing in this post, new Google+ apps and features. Check it out after the jump.

Google+ has amazing iOS and Android apps, but they are made for small displays only. Now, Google has announced an amazing new native tablet app for Google+ both on Android and iPad. It has a stunning, horizontally-swiping oriented user-interface with Stream items such as photos and links carefully spread over the entire display. Google+ for Android tablets is available right now from the [Play Store] and is coming to iPad “real soon”. We’ll inform you when it’s ready. 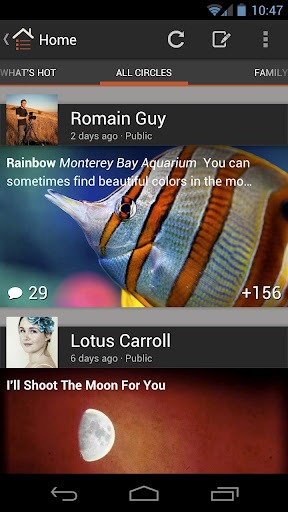 Google also announced a new “Events” feature for Google+ that integrates deep with Google Calendar. Events have three parts – before, during and after. The before part is pretty simple: you create an event, invite a Circle or particular individual(s) to it and share it on Google+. The “during” part is particularly interesting as it comes with a “Party Mode” which shares your event’s photo with the previously specified Circle as you snap them. The “after” part automatically sends out reminders to your Circle and gathers and sends out the best photos. Google did not reveal when Events will be released to the general public.

Google is really putting in all their efforts to convince Facebook users to make the switch to Google+. Innovative features, a beautiful-looking desktop website and mobile apps, they’re doing everything better than Facebook. The only thing that’s missing is the people. People won’t switch to Google+ until other people they know make the switch first.

In related Google I/O news, Google has announced the very attractive-looking and attractively-priced Nexus 7 tablet which is powered by Android 4.1 Jelly Bean which itself includes a number of new features that push Android ahead in the three-horse mobile OS race.