Google Play 4.0 For Android Leaked And Previewed On Video, Features A Design Overhaul And Easier Navigation

All users of Android, and definitely most readers of this website, are likely familiar with Google Play Store, Android’s online directory that connects users with a vast library of Google-approved third-party content, ranging from music and video to third-party apps and e-books. If a newly leaked video today is any indication, Google is getting ready for a major refresh for Google Play, with enhanced features and a much-improved design.

Those who have been users of Google Play since its early days might remember its difficult-to-use user interface that dominated the first few months of the app’s life, until Google finally streamlined it a few years back. Since then, several minor updates have been made, though this is the first major upgrade to Google Play since 2011. The new upgrade features larger images and icons, as well as a more colorful and “matte” design, in line with the design trend seen the latest changes to the user interface across Google’s mobile apps. The settings pane has also been slightly changed around, making it slightly simpler to customize how items are displayed and downloaded.

As you have likely been able to tell from the demo video below, much of the app has not been populated with content as of yet, which suggests that it might be a few weeks before it actually reaches the hands of the general public. However, Google’s design trend is clear and will likely be welcomed by users who are looking to download content onto their Android devices in a simple and seamless way.

Google Play has been available since the first Android release as the Android Market. Back then, it was mostly a directory for third-party apps for the newly-released platform. It was not until 2011 when the Android Market was revamped to feature more consumer-friendly content such as music, books, TV and video, while maintaining the apps section; this was also when the app was renamed Google Play Store. There is no clear indication for when this new redesign – dubbed as Google Play Store 4.0 – will make its way to Android devices, although judging by the nearly finished state of the app, it might not be too long. 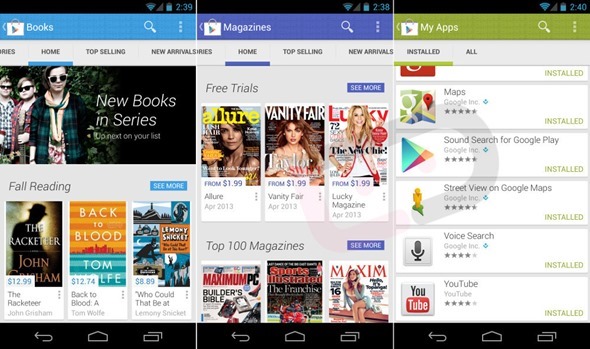