Although we didn’t expect an official announcement quite this soon, we have been aware for quite some time that Google was planning on bringing a collection of gift cards to certain retail outlets which would allow users to purchase virtual currency that can then be exchanged for goods and services from the Play Store. It hasn’t really been a great secret that they were coming and we’ve already seen them out in the public eye as well as evidence of the cards in the Google Play Store app.

According to Google, the official gift cards is a perfect purchase for any occasion and will be available for purchase from local retail stores, and although the official announcement specifically mentions Radio Shack, Game Stop and Target, it isn’t yet known if other retailers will stock the cards for purchase. In a similar fashion to Apple’s iTunes gift cards, the Play Store cards will allow users to purchase their favorite content from the Play Store.

Google is making the gift cards available in $10, $25 and $50 values, and as the denominations suggests, it doesn’t look as if the cards will be available outside of the United States, at least not initially. Users can use the cards in place of having a credit or debit card registered on the account to purchase songs, movies or TV shows. Additionally, Google profess to have the world’s largest collection of eBooks available on the store with all purchases syncing across devices immediately. 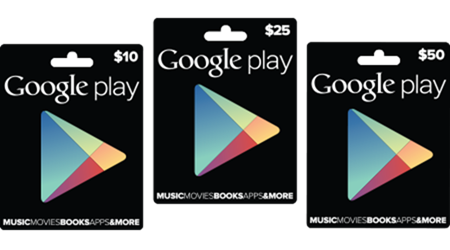 As well as being initially available in the three mentioned stores, reports are also suggesting that the cards will be made available on Walmart.com at the end of this month, and we have already seen some leaked internal correspondence from Target that suggests they will be stocking their shelves with the cards on the 28th of this month. The release of the cards will be an additional step taken in the Google Play Store in coming more on par with what Apple offers with the iTunes Store and all the trimmings which users can enjoy as part of that experience.

As a person who is outside of the United States and has recently purchased his first Android powered device, I for one hope that the cards will be set for an international launch sooner rather than later.