Google Now Gets A Proper Run-Out On Galaxy Nexus, Blows Our Mind [VIDEO]

Since the introduction of Siri along with the iPhone 4S and iOS 5 back in October of last year, voice-recognition implementation has seen a sharp rise, particularly within the smartphone industry. Demoed on the stage during Google’s I/O conference, Google search showed a considerable amount promise, and now one Android aficionado has given it a more in-depth run, testing the new entry to the Big G’s mobile operating system with forty total questions. 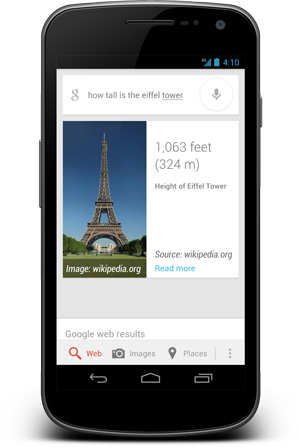 Although comparisons are made frequently between differing voice-based offerings from the likes of Apple, Google, and Samsung, the YouTuber, going by the name of JLishere, maintains his video is merely a showcasing of features as opposed to a comparison.

It seems to have very little difficulty answering questions, and manages to respond in a prompt and accurate manner with each task thrown at it. The video, assures JLishere, has been in no way doctored or chopped up to make Google Now appear superior than it is in reality, and the only edits made were to remove some time between each query, as well as reorder them for sake of categorization.

Hence, the processing time is portrayed in real-time, and for those interested, the demonstration was made on a Galaxy Nexus running an early build of Android 4.1 (JRN84D, takju build for Galaxy Nexus I/O edition), whilst connected to Wi-Fi.

Considering the build is to be regarded as a beta, it’s not without its flaws, but still manages reasonable performance even in its current state. For example, Google will readily offer walking or driving directions directly, so long as that mode of transport is explicitly stipulated, although at present, requesting transit or biking directions is not yet working.

Still, it’s work on understanding language as a human would, (presumably the aim of these technologies), is rather nifty, and not only was Google able to differentiate between how long a bridge is in length vs. how long a movie is in length (provided the data is available on the Knowledge Graph, but it could also recognize the difference between ‘Worcester Mass’ and ‘Wooster College’, which was a particular personal highlight of the video.

Such is the technology, it’s got a little way to go before it could even begin to be considered the real deal but it does appear Google is doing its homework in making Google Now a force to be reckoned with.