What would you do if you had Glass? This is the question that Google is putting to every tech enthusiast who is hoping to get their hands on pre-production editions of Google Glass, as the company is looking to ship some prototypes to creative individuals.

This is the first time that Google is handing out its innovative interactive goggles to the general public, other than developers. In order to select possible candidates, the company is setting up a social media contest, via Google+ or Twitter, where interested users need to explain why they are ideal homes for a Google Glass prototype, all in 50 words or less. It is also possible to include a short video (up to 15 seconds) or up to 5 pictures, therefore you can really let your creative spirit fly free.

Selected applicants will be reached by Google after the application deadline, currently set for February 27th. From there, they will officially be given the title of “Glass Explorer” and instructed to purchase the prototype for $1,500, plus local sales taxes, which will be delivered at a special pick-up ceremony in New York, San Francisco or Los Angeles. Definitely, Google is going for very committed people for testing out this prototype, placing quite a steep price tag and requirements for any prospective user. 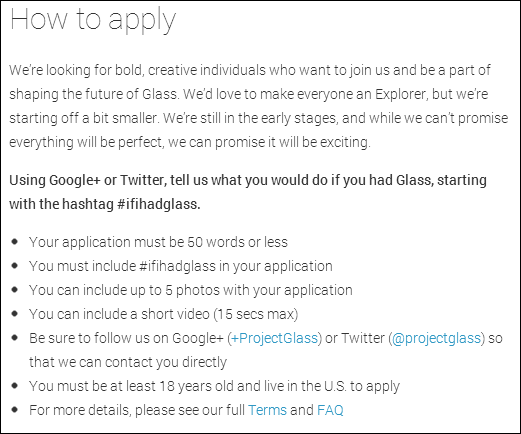 Google Glass is a new product pioneered by the Mountain View company that can be summed up as a hands-free smartphone. It is a set of glasses that uses special displays to display augmented reality information, such as finding directions, looking up translations or even snapping pictures, thanks to the device’s built-in camera. Google recently opened the product up to a select few developers in order to get the developer community at ease with the device once it is finally released, yet it has until now been quite reluctant to make it available to the wider public.

Want to get your hands on Google Glasses? If you are over 18 and based in the United States, you can go ahead and apply through either Google+ or Twitter, using the #ifihadglass hashtag. Surely, Google is expecting quite a lot out of these testers, but for such a revolutionary product, it is definitely exciting.