Apple’s recent migration to iOS 7 has pretty much guaranteed that any developer who sees a future in their mobile software will be pushing out an update that brings a minimum of visual changes. We’ve already seen a number of Google’s App Store offerings going through the update process, but today is the turn of the extremely popular Hangouts app that has been revised to version 1.3.0.

Google’s Hangout app has been affording iOS users the ability to initiate intimate and group messaging sessions for quite some time. The addition of photo sharing, emoji characters and video calls has ensured that the app remains popular with those that are into that kind of thing. Users of the app will now start to see version 1.3.0 propagating through the App Store, bringing with it a number of small usability changes as well as one large implementation that users will undoubtedly love. 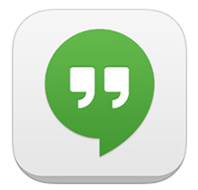 The largest change in today’s 1.3.0 update brings the addition of voice calls that will be available on the iPhone, iPod touch and iPad. The ability to make outbound calls, as well as receive incoming communications, is handled by the user’s Google Voice account and number and has been seamlessly integrated into the existing Hangouts environment. But keep in mind that this is only a US and Canada-only affair for now. In addition to the voice call features, users of the Hangouts app should prepare themselves for one of the greatest change ever – the ability to send and receive animated GIFs that play inline within the conversation stream.

The last change in Google’s official change log is centered around how the app handles externally playing music on the device. Previous versions of the Hangouts app took control of the system volume when a new message was received. Version 1.3.0 introduces a more sympathetic and less invasive system, by simply ramping the volume down when a message is received rather than shutting it off altogether.

If automatic app updates are enabled on your device then the chances are high that you already have the update installed. For everyone else, version 1.3.0 is available as a free-of-charge update on the App Store right now.