Google’s CEO Sundar Pichai has joined a number of other high profile individuals in expressing his opinions on FBI’s request for Apple to provide backdoor access to an iPhone 5c that forms part of the San Bernardino shooting case. A federal judge has ruled that Apple must indeed assist law enforcement in granting access to a seized iPhone 5c that belonged to one of the shooters accused of killing 14 individuals in California. Commenting on the situation via the use of social media, Sundar Pichai called it a “troubling precedent”.

If you weren’t privy to the whole situation, then it’s probably worth noting that Apple’s CEO Tim Cook almost instantly responded to the ruling with a public and open message to Apple’s customers. In addition to providing a little insight into the ruling and how it came about, Cook also took the opportunity to inform the customers that Apple would be contesting the ruling, claiming that the FBI essentially wants Apple’s engineers to create a new version of iOS that comes with the ability to circumvent very specific security features (read: backdoor access). Cook clearly doesn’t want to have to build in a backdoor to the iPhone or iPad.

Google’s CEO didn’t instantly get involved in the situation, but has since posted a series of tweets which show that he sides with Tim Cook and Apple as a whole. Most notably, Pichai’s five tweets on the predicament claimed Apple’s acceptance of the ruling, if that was indeed the company’s stance, “could compromise a user’s privacy”. He also stated publicly that acceptance of a ruling to provide access to data based on valid legal order is “wholly different than requiring companies to enable hacking of customer devices & data”. It’s difficult to disagree with those views. 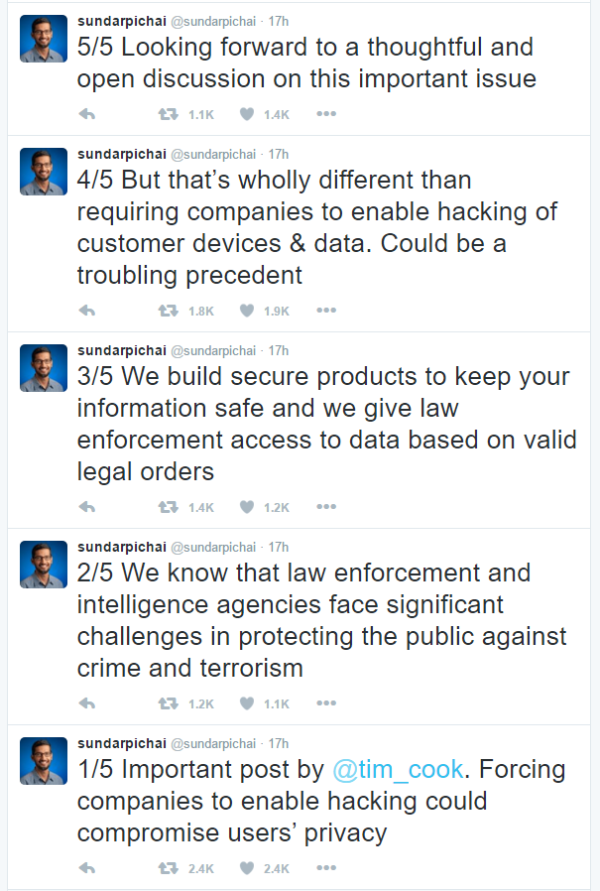 Of course, not everyone weighing in with an option on the San Bernardino iPhone situation is fully accepting of Apple’s stance on the ruling. Republic candidate, and general worldwide laughing stock, Donald Trump, predictably doesn’t agree with Tim Cook’s decision to resist the order, stating that he agrees “100 percent with the courts” and calling Apple “Who do they think they are?”.

We’re pretty sure that the public backing of a fellow CEO in the position of Pichai carries a whole lot more importance than the negativity of Mr. Trump.