Like AirPlay? Now you can use the technology to mirror your entire Mac display onto a television’s screen using an Apple TV!

We are huge fans of Apple’s implementation of AirPlay with the Apple TV. For those not familiar with the technology, AirPlay allows anyone with an iOS device and an Apple TV to send video, audio or both over the Wi-Fi network and onto a big screen via the little black box of awesome.

This feature is absolutely fantastic for sending music from something like Spotify straight over the network to your home entertainment system, for example. Watching videos from on an iPad and then flicking a switch to throw the video onto a flat panel display will never grow old also. 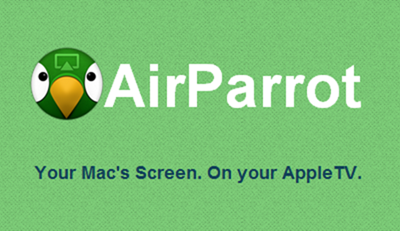 A recent innovation, AirPlay Mirroring allows whatever is on-screen to be sent from an iPhone or iPad and onto an Apple TV too, meaning menus and the home screen can be viewed in the big screen. This is perfect should you wish to show a slideshow in an app that doesn’t natively support AirPlay, for example. And just recently, Apple released the first ever developer preview of OS X Mountain Lion, which on the hand, allows you to mirror your screen using your Apple TV on your big screen TV. Lion users were left in the dust regarding this feature.

Now, a new app allows you do do the same thing, but on OS X Lion, and it’s called AirParrot.

Costing $9.99 and available for Lion or Snow Leopard versions of OS X, the app is still in its infancy. That said, the core functionality is there – users can send their whole Mac screen over the network and onto a television via an Apple TV – though there are some early bugs still to be ironed out. If you can cope with such bugs for now, the app will fill a hole should your require.

The app itself has a couple of important options. The first allows the selection different levels of compression which comes in handy on a slow Wi-Fi network, and the second allows the alteration of the amount of under scan transmitted. If you’ve ever had a video who’s sides have been chopped off on an Apple TV, then this is for you.

Obviously super high resolution iMacs and MacBook Pros may suffer from some issues with regards to final quality and lag, but for an initial attempt AirParrot has a lot of promise. If you can forgive the lack of polish right now, the ten dollar app could turn into a valuable tool further down the line.

For more details about AirParrot, you can simply head over to their website and know all about it, including the different prices they are offering for it along with download options.