In the last ten years, Apple have pulled themselves from the brink of obscurity into being worth an estimated half a trillion dollars. They have revolutionized the digital download industry spanning across music and video. They have released one of the most important consumer electronics devices of all time in the iPad which is changing the way we use think of technology and helping to reshape educational institutes.

They have even designed and launched one of the most advanced and successful smart phones the world has ever seen. But, I know what you’re thinking, what good is an iPhone running Siri when I still need to open up Mobile Safari to keep check on the National Basketball League.

Fear not NBA fans, for iOS developer Evan Coleman also feels that pain and has come to the rescue with the launch of his SiriNBA tweak which acts as a plug-in to the AssistantExtensions Cydia tweak. I would imagine that sports and technology would be at the top of most men’s list of favorite pastimes, and with SiriNBA we are seeing a fusion of those two things coming together in perfect harmony to create manly bliss. Ok, well maybe it isn’t as divine as that, but it is still a pretty impressive Siri addition for those NBA fans around the world.

Siri is a pretty impressive piece of kit right out of the box, but even the most advanced software has room for improvement. Considering that every individual user has differing tastes, the ability to extend Siri’s capabilities through the AssistantExtensions framework is something that can be used time and time again to appeal to different subsets of users. So what exactly can users expect from SiriNBA? Simplicity is the answer to that one as this particular tweak allows interaction with Siri to return information about all aspects of the current NBA schedule. 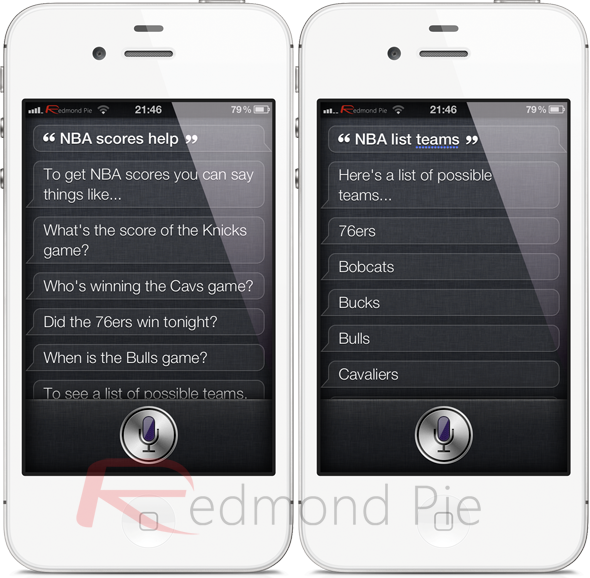 Siri can now be accessed to return results about current scores, when individual games start as well as who won a particular match up. By activating Siri and saying "NBA scores help", Siri will return a list of available options which can be used to produce NBA related results. Pretty much anything NBA related can be queried ranging from scheduled matches to points scorers throughout the game. As a free of charge download, fans of basketball really couldn’t ask for anymore from a Siri based tweak and it certainly beats having to access Safari or a dedicated application each time to keep on track of your favorite team. Let’s just hope that this kind of functionality is made available for other sports.

SiriNBA is available as a free of charge download from the BigBoss repository, requiring iOS 5 or above and a Siri capable device.

(credit: Thanks to Phil Synowiec for sending this in.)