If you are a Mac owner who has taken the plunge and upgraded to Apple’s latest Mountain Lion operating system, then you may find that everything that Apple have chosen to include is a definite upgrade from previous versions, but unfortunately the issue occurs with the things that the company have decided to remove. For reasons that will probably only ever be known to those who actually worked on building OS X 10.8, Apple decided to basically strip away all access to display settings, much to the detriment of users. Thankfully, the development community has OS X users covered with the SwitchResX app for Macs.

SwitchResX is available as an independent download from the developers website, partly due to the fact that it would never get accepted onto the Mac App Store due to the functionality that it gives to users. The developers of the software are describing the app as a tool to allow users to manage resolutions of any attached monitors and it actually comes with quite a substantial feature set for users to take advantage of. From a standard user point of view, SwitchResX gives users the ability to access most of the available monitor settings via a customizable menu bar entry. One of the great little features about the basic usage is that the app actually gives access to settings that are relative to the detected monitor. 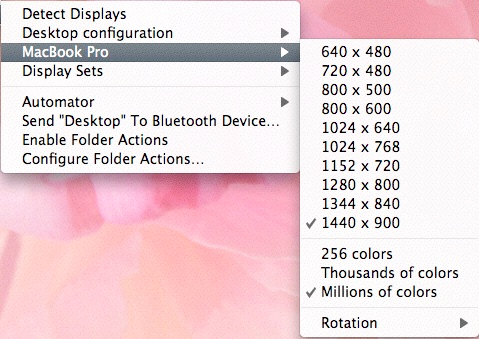 From a more advanced perspective, SwitchResX also gives the options for OS X owners to save the configuration of their desktop, which could involve saving the position of application icons as well as any open applications and their window sizes. Disabling or deactivating an attached monitor is also included in the abilities of the app, allowing users to quickly turn a monitor off without having to physically unplug it from the machine or mains.

One the face of things SwitchResX looks like a relatively simple Mac application that would appeal to those Mountain Lion users who take issue with the fact that Apple have removed access to valuable display settings. However, when digging further and actually investigating the abilities of the app it becomes evident that the package is extremely powerful and provides a number of extremely beneficial functions to Mac OS X users. The app is available as a free of charge download direct from the developers site, which is good for a free ten-day trial. After that, the software will continuously nag for a license to be purchased for $17.