George Hotz, also known as “Geohot”, is known in the iOS community as the first to fully unlock the original iPhone, back in 2007 when he was just 17. Fast forward to today, he has created a new app for iOS, known as “Reactions”, which gives photo taking a whole new twist: capturing your face reaction to a photo taken from your iPhone and then sharing it on Facebook or Dropbox, automatically.

Reactions can easily be described as a blend between Instagram and Photo Booth for iOS. Using the device’s rear camera, it allows pictures to be snapped. Should users decide to “react” to the just-taken picture, they can click on a button on the upper-right corner of the screen. Once this step has been taken, there is no turning back: using the device’s front camera, it will snap a photo of you, and therefore your face reaction to a photo you have just taken, combine both of the pictures and share the result on Facebook. There is no option not to share the final result, which can look something like this: 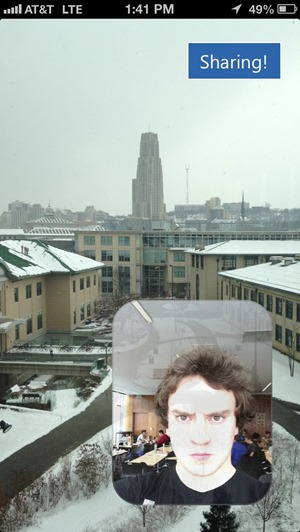 This is the first app of its kind and definitely quite an interesting concept that has the potential to become as popular around Facebook as Instagram is today (along with making your embarrassing facial expressions extremely popular as well). However, if you are quite a good photographer and have quite a nice smile, this may be your ideal Camera app for iOS. The main selling point of this app is the fact that it takes advantage of both of your device’s cameras, which, as Hotz pointed out on Reactions’ website: 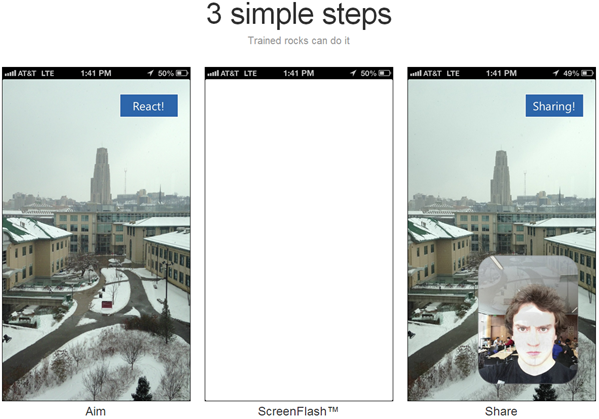 “What’s better than one camera? Two cameras! Reactions supports two cameras. That’s twice as many cameras as our leading competitor,“

If you are wishing to get Reactions, you will have to wait a while until the app gets approved by Apple and makes its way onto the App Store. However, due to the harmless nature of this App, this will likely be merely a formality and users will be able to start snapping their “reactions” in no time!