Although things have been somewhat quiet from Nokia and Windows Phone 8 in light of the upcoming smartphone releases from Samsung and HTC, the camera of the Finnish company’s Lumia 920 is still considered among the best in the business. Conversely, the Samsung Galaxy S Series’ snappers have tended to underperform, and while Nokia’s flagship completely smoked the Galaxy S III in terms of still camera performance (particularly in low light), the Galaxy S4’s much-hyped 13-megapixel offering brings the kinds of improvements you would expect of a next-gen handset. To test one category, one user has taken the opportunity to produce a stabilization comparison video of Samsung’s apparent best video camera against that of the 920, which of course includes that much-lauded PureView technology. Which came out on top? Find out, after the break!

The test wasn’t exactly carried out using strict, industry standards of discipline, with both handsets instead strapped atop a toy vehicle before being dragged around a room. Nevertheless, it does present us with a general idea of how the to perform against each other, and you can check out the video below in its entirety: 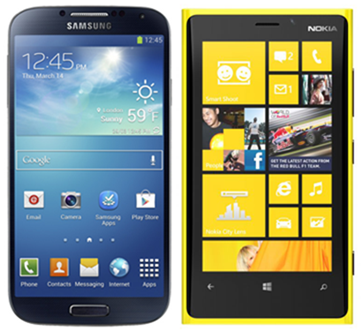 As you can see, despite the Galaxy S4 being considerably newer than its Windows Phone counterpart, the Nokia Lumia’s OIS (optical image stabilization) comes up trumps, and while the upcoming Samsung device looks rather jolty and unstable, the Lumia 920’s recorded video is comparatively smooth.

Most people aren’t going to strap their device to a toy Ferrari and wheel it around an office, but in real-world terms, this gives some indication as to how each device may perform in shaky human hands. Keeping a device still is one of the biggest challenges facing the growing band of point-and-shooters, but while Nokia appears to be helping to rectify this, it would seem Samsung’s priorities lie in other aspects of its own device.

With OIS as standard, you’d be hard pushed to find a handset on the market better than the Nokia Lumia 920 for recording stable video clips, and even with a new wave of devices about to release, the darling of WP8 is still very much the victor here.

Putting the above video aside, which device would you opt for to fulfill your video recording needs?