The Samsung Galaxy S4 has been the biggest smartphone release of the year, having shifted 10 million units in its first month on sale. Those kinds of numbers were to be expected, though, and as ever with Samsung, the story doesn’t end there. As well as the camera-focused Galaxy S4 Zoom and the ruggedized dust and waterproof model for those careless / overly careful folks out there, the Galaxy S4 Active, the Korean company is also poised to release a Galaxy S4 mini, and if leaked benchmarks are to be believed, the device will pack in a Snapdragon 400 processor.

The Galaxy S III mini was a very successful outlet last year for those who didn’t want or need the might and beastliness of the flagship, and so it was something of an inevitability that this year’s release would follow suit. There were some early suggestions that the mini version of the Galaxy S4 would launch alongside Android’s current poster boy, but even though that particular move never bore fruit, it would appear as though consumers won’t have to wait too long to see the scaled-down alternative.

According to reports, the Galaxy S4 mini will pack a 4.3-inch display, and now German blog AllAboutSamsung has waded into the debate with what is claimed to be legitimate AnTuTu benchmark results of the device. Since they’ve been obtained from an unspecified source, and also considering these kinds of things can rather easily be faked, we’re taking this with the proverbial pinch of salt; but with precious little else to go on at this stage, we’re almost obligated to check out. 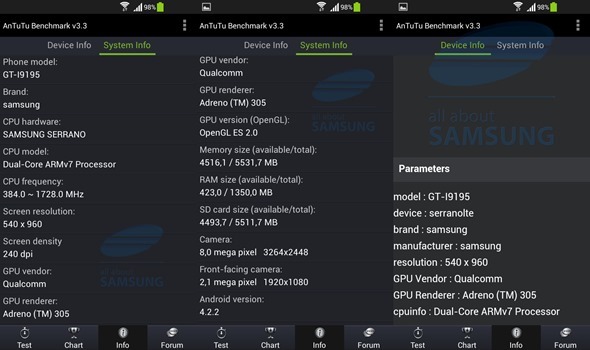 If the benchmarks are the real deal, we can expect 1.5GB of RAM, an 8-megapixel rear-facing snapper allied to a 2.1-megapixel front camera, and a 960 x 540 qHD display. With suggestions of a dual-core Snapdragon 400 and Android 4.2.2 Jelly Bean right off the bat, the device certainly doesn’t look a pushover, and although it’s no match for the real Galaxy S4 in terms of real specs, it does look to accommodate the large ensemble of floating voters.

It won’t be long till we get to see the device n person, since Samsung’s own website has pretty much leaked the existence of the Galaxy S4 mini a few days back.

What do you think – do the purported Galaxy S4 mini specs float your boat? Please do share your thoughts via the usual mediums below!