Galaxy S4 Benchmarks Are In: Twice As Fast As iPhone 5

If Geekbench scores ruled the mobile industry, Samsung’s latest and greatest Galaxy S4 handset would have blown out the competition. Having carried out some comparisons of the Geekbench 2 scores of the current popular and big-selling devices, PrimateLabs has established that not only is the GS4 considerably faster than any other smartphone ever made, but almost twice as fast as the iPhone 5, now that’s something.

Of course, sheer power isn’t necessarily an accurate gauge of how smooth a device is to use in real life, but these findings do show – if it was ever in doubt – that Samsung is not afraid to pack its devices to the rafters with eye-watering levels of tech.

The Galaxy S4’s score of 3,163 was a large fraction higher than that of its closest perceived rival, the HTC One, which scored a still-respectable 2,687. LG’s Nexus 4 was next on the list with a score of 2,040, ahead of the quad-core Galaxy S III, which managed 1,717.

The iPhone 5 was a lowly fifth, with a score of 1,596, but while the numbers will tell you that Apple’s flagship is considerably behind the rest, it’s worth pointing out a couple of things. Firstly, the device is over six months old, and aside from the Galaxy S III, all the devices ahead of it in the scoring stakes are considerably newer. Moreover, since Apple molds its software around its hardware and vice-versa, the Cupertino company is better able to achieve a smooth operating system, and can thus afford to be a little more conservative about how much power it decides to place within. 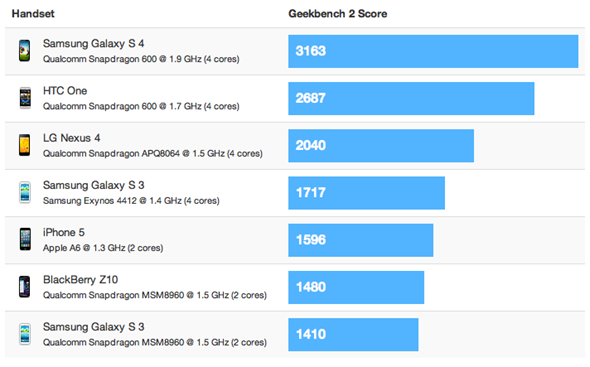 Trailing the iPhone 5 in sixth place was BlackBerry’s comeback effort, the Z10. Having changed its name from Research In Motion, built a new ecosystem from the ground up and finally begun to modernize its device range, BlackBerry has much riding on the Z10. It certainly performed impressively in early hands-on tests, and with a GeekBench 2 score almost equaling the iPhone 5, it certainly has nothing to be ashamed of.

The dual-core version of the Galaxy S III came seventh with a score of 1,410, which only further accentuates just how much more powerful the Galaxy S4 is than its predecessor. Sales of the handset provides the real test of resolve, of course, and with such a well-established army of loyal fans, I find it hard to see a rivaling device getting anywhere close to outselling the Galaxy S4 in the coming months.