G-Form, case maker famed for putting some of the market’s most sought-after gadgets under extreme tests is back with yet another such clip. A couple of months after Austrian Felix Baumgartner famously skydived from space, breaking all sorts of records including the sound barrier, G-Form has done likewise, only instead of sending a human down from over 100,000 feet, the company chose the slightly less-exciting iPod touch from Apple.

Still, given how fragile mobile devices are nowadays, one would expect the touch to, at best, escape with a severely cracked screen, despite the reputation of the enclosing G-Form case. However, once again, the company has proved its protective gear is far superior to the majority of competition, and also had plenty of fun with it, too. The case is called the "Xtreme" for iPhone 5, and what better way to exemplify those credentials than have it take part in some extreme sports. 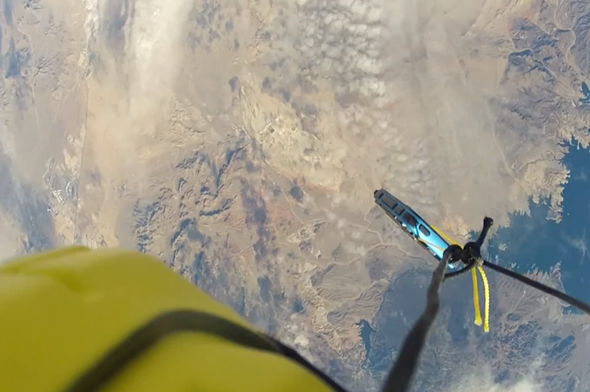 The fact it escaped relatively unscathed (and apparently fully-functional) after such a sheer drop, is nothing short of astounding, and what’s perhaps even more impressive, is the fact that, for much of that fall, temperatures hit lows of -60° centigrade (-76F). Add to that the high winds and speed of drop, and you can see just why G-Form is the company of choice when it comes to industry standard (and beyond) cases for mobile devices.

It landed on rocks, some 40 miles from where it was launched, and looked as though it had just been taken out of the box. Unfortunately, the attached camera seemed to cut off halfway through, and though it was said to have submitted "to extreme cold", it will undoubtedly raise a few question marks over the legitimacy of the whole thing.

Considering the fragility of iPod touches in general (the stores seem to be the only places to spot one without multiple cracking and shards of glass missing), you may want to invest in one of G-Form’s numerous different options. The Xtreme line of cases would seem the most robust, but if the top-level offerings can protect against the kinds of conditions demonstrated above, I’m sure the mid-range shells would aptly protect you from the day-to-day six-feet drops.