Fruit Ninja is a popular video game which was initially released for iOS and later for a variety of platforms such as Android, WP7, Symbian and even Samsung’s Bada OS. In the game, players have to use their fingers to swipe across the touch-screen to slice different types of fruits while avoiding bombs. The difficulty and score multiplier increases as time goes by. After finishing a round, users can compare their scores with friends online. 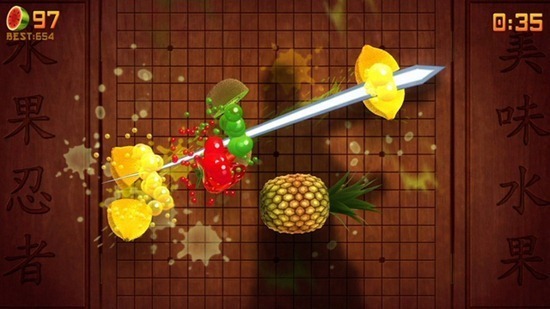 We reported on the game’s imminent release yesterday and are here to inform that, yes, the game has, in fact, been released. Fruit Ninja Kinect brings the addictive gameplay of its mobile sibling to the Xbox 360 console. It is a game made for Microsoft’s motion-sensing accessory Kinect wherein the user’s hands/arms are motion-sensed and, hence, used for slicing the fruits on screen. It’s quite tiring and looks wicked fun. It also comes with two player side-by-side multiplayer making it the perfect party game!

YOU are the ninja! The worldwide gaming phenomenon Fruit Ninja has now arrived for Kinect! Your arms are now blades, and the epic battle against the world’s most delicious produce is just beginning. Fruit Ninja Kinect is an amazing evolution of the slice-em-up genre created by Halfbrick, utlising next-gen power for the juiciest combat ever! With Classic, Zen and the frenetic Arcade Mode, Fruit Ninja Kinect includes all the action you know and love with precision control – along with special features exclusive to Kinect! With Party Mode, multiple players can turn a normal night into a fierce tournament – and the new Challenge system will reveal the true masters among your friends!

It costs 800 Microsoft Points (that’s $10) and can be downloaded from Xbox Live Marketplace right now from the link given at the end. 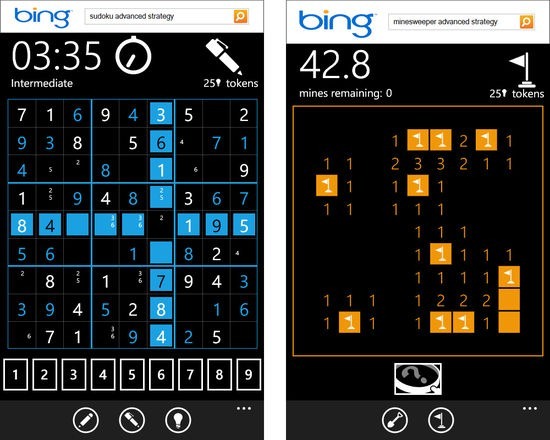 The other two games released today are Sudoku and Minesweeper – both for Windows Phone 7. These are games that just about everyone has played at one time or the other. In Sudoku, players place numbers in a nine 3×3 grids based on certain combinations/logic which is set by the puzzle setter. In Minesweeper, the objective is to clear a field full of mines without detonating any single one.

Both games have a look based on the simple, clean and modern Metro design language, feature a leveling system and powerups.

If you’re a GamerScore-junkie, both games come with 50Gs and are available starting today on Windows Phone 7. They are free games and can be downloaded from the links embedded at the end.