As many of you already know, Android 4.1 Jelly on the Google / ASUS Nexus 7 uses a mix of tablet and phone user interfaces. The home screen launcher is fixed in portrait mode with virtual buttons at the bottom like the Galaxy Nexus, but when you go into landscape mode for landscape-oriented apps / games like Dead Trigger, the virtual buttons are placed at the bottom unlike the Galaxy Nexus. This is a completely new mix for UI (with respect to placement of virtual buttons) that has never been seen before on Android tablets; Google developed this specifically for the 7” tablet form factor.

Now, while I’m not one of them, there are people who prefer using the Nexus 7 in landscape mode. For that purpose, developer FaMe IT has an app called Ultimate Rotation Control that lets you enable landscape orientation while you’re using the home screen launcher or other apps.

What Ultimate Rotation Control does is override the built-in orientation settings to force your device into your choice of rotation. The app comes with ten different modes: automatic which is how Android handles orientation, forced auto where app’s preferences (to stay locked in portrait, for example) are overridden, Lock puts the screen in current orientation, Portrait and Landscape lock them to respective orientations etc. etc. There are other modes as well, but they appear to be less useful. 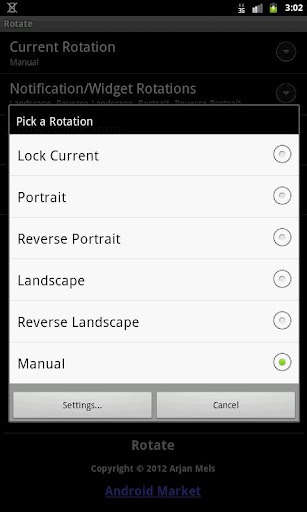 Of course, there are going to be apps that just don’t work properly after being forced into a particular orientation; you can set a per application preference to work around this issue, which isn’t a big deal at all.

After installing and setting up, you will see the app in your notification drawer so you can easily change settings. It even comes with a widget so you can do the same directly from your home screen. 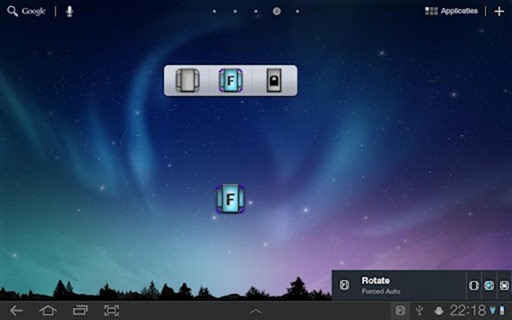 Ultimate Rotation Control works on all Android devices from 1.6 Donut to 4.1 Jelly Bean. It is available as a 7-day trial version. Once you’ve gone through your free trial, you have to buy a $0.99 license separately from the Google Play Store.