Even though developer Dong Nguyen pulled his immensely popular Flappy Bird game from the App Store and Google Play Store earlier on this year, the cult following it garnered has since spawned various tribute acts and spin-offs. But while most of these clones have been pushed out by opportunistic developers looking to cash in on the title’s success, one Apple enthusiast has come through with a port for the Apple II, and surprisingly, it works like a charm. Having released a clip of his creation, aptly named Flapple Bird, in action, he seems to have replicated the graphics and gameplay down to a fine art, and as I think you’ll agree once you see the clip, the result is simply awesome.

One of the reasons why Nguyen decided to remove Flappy Bird from the app portals was that despite its popularity, it was also becoming a source of great frustration. From the hilarious clip of one guy taking a hammer to his device in anger to users complaining of the stress it was causing them, Nguyen wasn’t enjoying the fallout of a game that he made purely for the purpose of entertainment, and while these game crazes tend to fade away as quickly as they arrive, the fact that Flappy Bird didn’t get the opportunity to do so has perhaps only intensified the fascination with it. 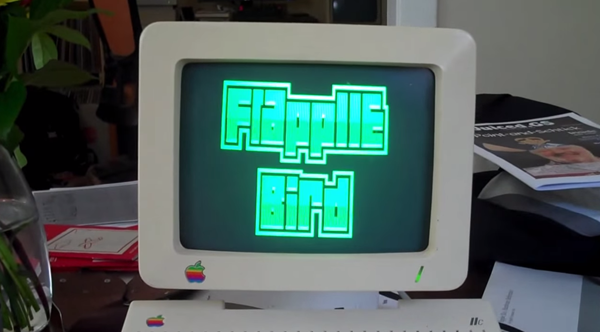 Some of the Flappy Bird clones have been right on the mark, offering a like-for-like experience similar to the original, but developer Dagen Brock has taken a rather different approach in porting the game through to his Apple II. Like many a great project, it began as a whimsical hobby that, through time, he channeled more of his efforts into, and after six weeks of hard work in the lab, Flapple Bird was born.

The iconic Apple II is a true relic of the Cupertino’s rich history, and so to see a current craze like Flappy Bird gracing its display is really something to savor. As you’ll see from the video of Flapple Bird in action, it runs incredibly smoothly, and in fact, is slightly less cut-throat than the original for those looking to rack up a decent score.

If you don’t happen to own an Apple II but still want to check this out, there’s a Web emulator available via this link, and as ever, be sure to leave your comments with us below.