Do you have an iPhone, iPad or iPod touch running iOS 10? Are you loving the experience that you’ve had with it so far, but find yourself being bombarded with little niggles that can get extremely annoying when they happen on an almost daily basis? Apple’s iOS 10 platform may come with tons of great new features, but it definitely still does have some issues that will need to be addressed going forward. One of those issues, which doesn’t seem to occur with any uniformity or regularity, is a rather annoying pop-up that requests access to Twitter accounts on the device. 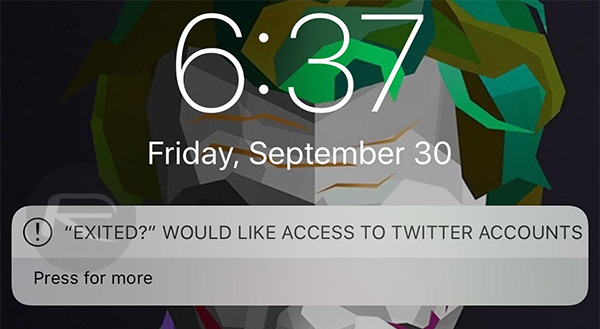 It basically shows up randomly anywhere, whether you are on the Home screen, Lock screen or any app, as a notification or alert that says “exited?” Would Like Access to Twitter Accounts. The confusing thing here is that there’s no mention of the app that actually wants to access the Twitter accounts registered on the device.

More so, when the prompt presents you the options to allow or don’t allow “exited?” access to your “Twitter Accounts”, there’s actually no action performed even when permission is granted, meaning that it seems like a fairly useless message that makes the device impossible to operate as it continuously pops up again and again no matter what.

The workaround fix for the problem is to go through the process of performing a hard reboot on the affected device.

If you have an iPhone 7 or iPhone 7 Plus, then you will likely be aware that performing a hard reboot of the device has change somewhat from previous devices. This is to do with the fact that Apple has removed the mechanical Home button from the device in favor of a touch-sensitive one that provides feedback via the new Taptic Engine in the device. To hard reboot an iPhone 7 or 7 Plus, you can follow our guide here: Hard Reboot / Restart iPhone 7 Or iPhone 7 Plus, Here’s How. 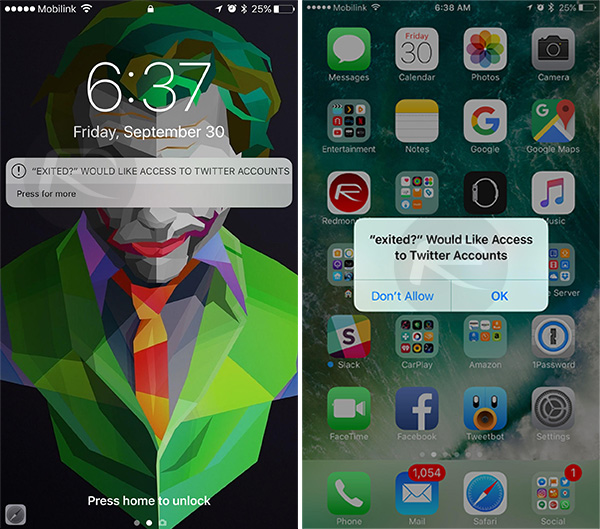 Of course, if you have an older generation device, such as an iPhone 6 or iPhone 5s, then the previous method of performing hard reboot is still valid. You can follow the instructions for that here: How To Hard Reboot / Restart Your iPhone, iPad Or iPod touch.

Hopefully this should solve the problem that’s being intermittently displayed on the device until Apple can come up with either an explanation of why it’s happening, as well as a real fix, or a software-based fix in a new version of iOS.

This did fix the issue for us. Let us know in the comments below if it did for you as well.