After a couple of months anxiously waiting, the very first iOS 5 untethered jailbreak arrived in a blaze of glory just two day ago, and techies far and wide running Apple’s latest mobile OS duly obliged to the calling of the iPhone Dev Team’s ever-reliable utility. 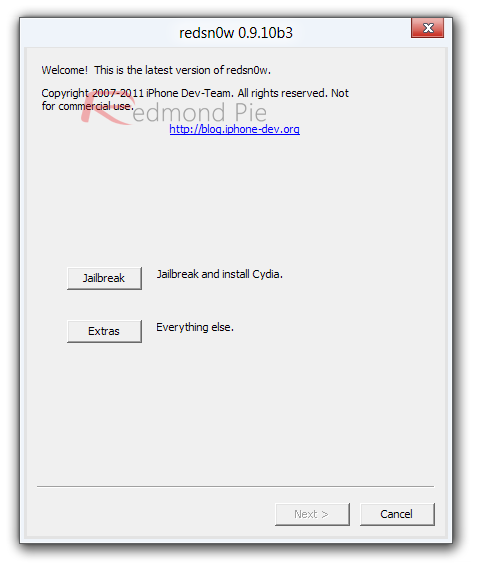 In all the apparent excitement, many of you will have rather hastily overwritten a previous jailbreak and leapt blindly into the glorified untethered universe. Unfortunately though, this meant for many that MobileSubstrate – a key element of most of the the better Cydia tweaks and apps – kept crashing, rendering the jailbreak somewhat restrictive. Luckily, a third beta of RedSn0w has been released for both Mac and PC’s which provides the antidote.

The Dev Team issued a blog post detailing the minimal yet significant fixes:

The b3 version of redsn0w fixes a problem where re-running redsn0w over an existing jailbreak would cause MobileSubstrate-based apps to stop running until MS was installed again.  Now you can re-run the redsn0w jailbreak step without worrying about that (but still remember to de-select the “Install Cydia” option if it’s already installed).

In addition to the wise words of the release log, if RedSn0w fails to properly identify the data of your auto-detected IPSW, then you’ll simply need to manually selected your device’s 5.0.1 IPSW by navigating to Extras > Select IPSW in Redsn0w’s menu.

Unless you’ve been in a cave – or having too merry a Christmas – you will have seen our post with full instructions on how to jailbreak your A4 iPhone, iPad 1 or iPod touch devices using Redsn0w. Incase you’ve missed it, you can check out all the details here, which includes all the steps necessary in guiding you through to a swift untethered jailbreak on iOS 5.0.1. You can find the download links for the new and updated Redsn0w at the end of this post.

This update follows the “launchctl” error amended yesterday in beta 2, which continually plagued many whilst using Cydia. With such a significant release, don’t be surprised if a few more bugs occur – and be less shocked when the Dev Team swiftly iron them out!

Those of you using the new untethered release, how are you finding it? Is it as smooth as times past such as JailbreakMe 3.0 untethered jailbreak for iOS 4.3.3 or iOS 4.2.1 GreenPois0n? Leave your comments, issues and praise via the usual mediums below.